Book review
Historical Remembering: Looking Back at East Germany
Rich, evocative photos that portray those heady days before the collapse of the Wall—and remind us how looking back also means recognizing that something has been lost.
Photographs by Augusto Bordato
View Images

Historical Remembering: Looking Back at East Germany
Rich, evocative photos that portray those heady days before the collapse of the Wall—and remind us how looking back also means recognizing that something has been lost.

While working as an interpreter at the Italian embassy in East Berlin for ten years, Augusto Bordato documented the daily triumphs and monotonies of life in the DDR [Eastern Germany]. Twenty-five years after the fall of the Berlin wall in 1989, Contrasto has published a collection of his work entitled DDR, Remembering East Germany. The photographs, taken with a classic Leica film camera, focus on the last two years of the regime: parades, war ruins, beach vacations, lines at the local store, and finally the opening of the Wall. The grainy black and white shots woo us with their familiarity and their humanness, enhanced by a remarkably rich tonal range.

The book is intended as an act of historical remembering, according to Massimo Nava’s introduction to the book. Nava says that Bordato revisits a past “we’ve all too rapidly forgotten,” and reveals “aspects of daily life distant in time and still largely unknown.” He points out that it is a past that has been lost or purposely forgotten by a generation of Germans since the fall. For Nava, Bordato’s book restores this cancelled memory of a “life in black and white…that no longer seems to belong to anyone.”

In reality, however, the book shows us the limit of our ability to recuperate the past. In “remembering” the DDR, Bordato reinvents it at the same time, adding substantial text alongside the pictures that intellectualizes and changes the past he once experienced. The text (with captions in Italian and English on each page) prevent us from experiencing the photos as fragments of reality. We see the images as Bordato sees them now, with twenty-five years of hindsight.

Which is, in some ways, a shame, since the photographs are so evocative in their own right. In one photo, statues broken by the Dresden bombings look hauntingly human, entwined in the grass like naked lovers. The tones are superb: the stone bodies are a striking translucent white surrounded by even, gray earth tones and masked in the foreground by blurred shrubs in true black. The description, however, interrupts our reverie with a photographer’s musing: “Like death masks and photographs, casts are also impressions of something real.” We enter the photographer’s perspective as a historical witness and see the broken statues as symbols of the loss and death of an entire era.

Similarly, the last pages of the book offer Bordato’s re-interpretation, rather than pure memories, of the opening of the wall. His photos are vivid, blurred nighttime shots. We are in the crowd, scrambling to get the first peek over to the West. In the middle of this section, however, we find an image that takes us away from the moment. It is the cover photo: an image of a young couple wearing Communist military uniforms in what one assumes is ironic, or perhaps even earnest nostalgia. One would think they were part of the crowd that night of the 9th of November, but in reality the picture is taken months later when uniforms have safely been rendered memorabilia.

In his curation of the past, Bordato collapses historical time. He shows us that history is constantly being rewritten, even when we have the very images before us. Almost a hundred years after Marcel Proust, that great philosopher of memory, wrote “Remembrance of things past is not necessarily the remembrance of things as they were,” Bordato’s book shows us again how remembering means changing and how looking back also means recognizing that something has been lost. 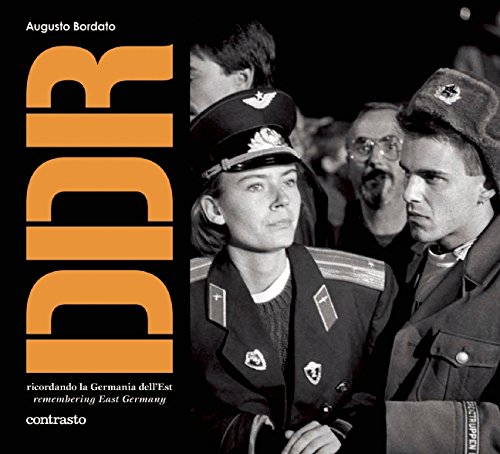