Book review
Escape
A powerful new photobook about individuals in Russia and Ukraine who have crossed the line, seeking total solitude, excluding themselves completely from society.
Photographs by Danila Tkachenko
View Images

Escape
A powerful new photobook about individuals in Russia and Ukraine who have crossed the line, seeking total solitude, excluding themselves completely from society.

Sometimes, we all feel the desire to get away from everything and be by ourselves. Even if it’s only a short walk or a long drive, or the occasional dream of a bigger place where solitude would be a virtue. Few, though, take Henry David Thoreau’s example to its logical extreme and become actual hermits. Danila Tkachenko, fresh from studying documentary photography at the Rodchlenko Moscow School of Photography and Multimedia, set out to record individuals in Russia and Ukraine who have crossed the line, excluding themselves completely from society. The result, Escape, is a series of photographs that are both charming and disconcerting and, like the best of documentary photographs, tell us far more than their empirical content.

A man asleep, composedly stretched out on a horizontal trunk of a fallen tree, suggests peace and calmness, a reassuring image of a body in harmony with nature. But on the other page, we find a different person in a forest: gaunt, no longer young, with a haunted look in his eyes that takes our attention away from the verdant scene of saplings, pine trees, bracken, bramble and mushrooms.

There are other portraits throughout the book but only one—a naked figure, arms aloft—suggests a degree of contentment. Meanwhile, another man completely covers his face with his hands, symbolizing all the subjects’ attitude towards human society. As one escaper says, “Mankind is fatally ill with a terrible disease named lack of soul. Salvation is now only possible through escaping alone. Common efforts are fruitless. It’s too late.” Other statements by fellow recluses hint at problematic former lives from which escape had become imperative. The shots of their makeshift abodes range from fragile, temporary structures to secure-looking cave dwellings or even some lodging places with formal entrances—indicative of the different personalities that inhabit them.

There are, however, two subjects to this collection of photographs: human and nature. Surrounding the men and their meager habitations—no women—is a density of foliage and undergrowth. The delicate shades of green become caught in the blink of the shutter, capturing a world substantial in its natural reality. Tkachenko is aware how this world dwarfs the humans’ lives that are his ostensible subject: the first five spreads of Escape are dark and forbidding photographs of an inhospitable forest habitat, devoid of human creatures and utterly indifferent to those who might seek shelter there from the storm of their former lives, from the cruelty of human society. 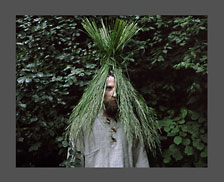