Library of Dust
A beautiful new over-sized book from David Maisel documents the disquieting beauty of final remains in an old insane asylum.

American photographer David Maisel has delighted us for nearly a decade with colorful and disturbingly beautiful aerial abstractions of chemical wastelands throughout the United States. Now he goes from a macro view, to small, up-close photos of other unlikely sources of biochemical beauty.

Maisel discovered these colorful abstractions in a state-run psychiatric hospital in Oregon, where the patients who had died there — and whose bodies were not claimed by any family member — were cremated. Their ashes were sealed in handmade copper canisters and stored on shelves in a giant library-type room that contained several thousand nearly identical cans. Each “spirit” that is housed in these cans seems to demand its unique individuality, even after death and cremation. Maisel was struck by the unexpected beauty he discovered there, where, in his words, “Corrosion blooms wildly from the leaden seams of many of the cans.”

In one of four poetic and philosophical essays that accompany the 80 photographs in this book, Michael Roth says, “The pictures are strikingly beautiful, and yet we don’t want to be seduced by their colors, their biomorphic forms, their striking clarity. These are, after all, photographs of death, of the failure of remembrance and of the persistence of the unclaimed.” Roth’s essay is aptly titled Graves of the Insane, Decorated.

David Maisel’s photographs of nearly 110 funereal copper canisters are a mineralogical delight. Bearded with a frost of subsidiary elements, their surfaces are now layered, phosphorescent, transformed. Unsettled archipelagos of mineral growths bloom like tumors from the sides and bottoms—but is that metal one sees, or some species of fungus? The very nature of these canisters becomes suspect. One is almost reluctantly aware that these colors and stains could be organic—mold, lichen, some yeasty discharge—with all the horror such leaking putrescence would entail. Indeed, the canisters have reacted with the human ashes held within.

The other essays in the book take off on other trajectories: musings about the mineral make-up of star dust in outer space; a bit of historical background about this particular insane asylum (the buildings were used as the movie set for One Flew Over the Cuckoo’s Nest); and an exploration of evolving treatment of the insane in various societies.

These stunning and strange photos are presented close to life-size in an elegant volume published by Chronicle Books. The size of the book is as daunting as the subject matter. Indeed, you need a large library table and good light to fully appreciate the rich details and subtle nuances in this oversize volume. Photographed against a pure black background, these crusty containers could be dead space ships forever orbiting silently and alone in outer space. Odd, disconcerting, and beautiful. 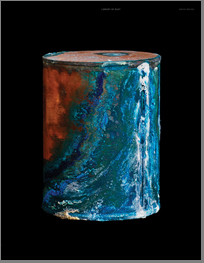