Feature
My Last Day at Seventeen
Rich portraits of teenagers in Ireland coming of age — as individuals, as groups, as part of a community and as the new generation of Irish. These photos capture intimate, compassionate, honest and confused moments — raw truth that is electrifying and inspiring.
Photographs and text by Doug DuBois
View Images

My Last Day at Seventeen
Rich portraits of teenagers in Ireland coming of age — as individuals, as groups, as part of a community and as the new generation of Irish. These photos capture intimate, compassionate, honest and confused moments — raw truth that is electrifying and inspiring.

Doug DuBois first went to Ireland at the invitation of Sirius Arts Centre in 2009. What began as a month-long residency grew into a five-year project about youth, Ireland, and an exceptional group of young people from a few blocks of a housing estate in Russell Heights. The resulting photographs are an exploration into the promise and adventure of childhood with an eye toward its fragility and inevitable loss.

Now, his five-year project has been published as a book by Aperture (with your help, he completed a successful Kickstarter campaign).

Much more than “another coming of age” photobook, this one includes great photos (of course), interviews with many of the subjects who were photographed, and an original comic strip that includes the main characters and the photographer talking about…well, life, what it means to be photographed, how photographs are different from life, and so on…

Read the honest, candid, generous interview with the photographer below and then order the book.


LC: How did you first decide to make this long-term project? Did you start with a few casual portraits that you really liked, and then it evolved into a larger project? Or did you have a big project in mind from the start?

DD: I came to Ireland in 2009 at the invitation of the Sirius Arts Centre in Cobh. I had no idea what to do there and I almost turned down the offer. The director at the time, Peggy Sue Amison, connected me with a group of young people who were interested in photography and during the course of my stay we designed and made a blurb book together.

A few weeks into my residency and frustrated by my lack of progress on any kind of a project, I asked the group of kids to take me to their neighborhoods and show me around. Kevin and Eirn offered to take me to “the steps” which turned out to be a drinking spot for under-aged kids in and around Cobh. Later that night, Kevin took me to his house in Russell Heights, a housing estate with a mix of working and middle class homes, some council housing and the like. I met his family and some neighbors, made a photograph of Roisin in her bedroom and realized almost immediately that this was my entrée into a compelling and complex corner of Irish life.

I went back to Russell Heights the next day and almost every day after that first encounter. Sometimes people drove by and called us “fucking pervs;” sometime they called the local garda (police) who would check my ID; and once in a while someone would agree to be photographed.

I worked with an assistant, Ivan Rynn who was studying photography in nearby Cork. We shot with a 4x5, two 6x7 cameras and the occasional strobe. We were hardly a discreet presence, which worked to our advantage since no one could accuse us of sneaking photographs or spying on their lives.

Since I was shooting film, I didn’t see any results until I returned to New York at the end of my residency. There was a photograph I made that first night on “the steps,” that became a touchstone for the project. It’s a close up of Lenny blowing smoke into the camera. He was a bit drunk and it was noisy and chaotic all around but somehow I convinced him to hold still and simply stare into the lens.

His expression is direct and open. Emboldened by alcohol and some coaxing from behind the camera, he looks a bit hapless yet full of bravado. A few days before I left Ireland that summer, I photographed Eirn in a new dress on the eve of her 18 th birthday. She stood with a similar mix of confidence and vulnerability and at some point remarked, “It’s my last day at seventeen!”

Eirn gave me the title for the work and the photograph of Lenny’s face offered one way to picture the experience of coming of age in Ireland. I asked Peg at the Sirius Arts Centre if I could return the next summer and they allowed me back every year until the project finished in 2014. I couldn’t have done this work without their help and commitment.

LC: All of your photos seem so direct, and honest and real — how do you get people to reveal themselves so openly for the camera?

DD: While the photographs may seem so direct, honest and real, they only offer up what the viewer is able and willing to project into them. I know this sounds a little preachy, but the people I know in Russell Heights, especially the handful or more I’ve come to know as friends, are quite distinct from their photographs. Eirn and I had many long discussions and more than a few arguments over what her images mean. In fact, the book ends with a transcription of us arguing over the meaning and implications of the last photograph – a picture of Eirn in her back garden. She gives such a powerful and convincing interpretation of this image that I let it stand in for the photograph itself. The book ends, with the text of our argument covering the photograph: Eirn has the last word.

To get back to your question – I could be cynical and say that the “real” in the photograph is all smoke and mirrors and not be far from the truth. But in the end it all comes down to a faith that I can make and combine images in a way that doesn’t betray the trust given to me by the people in the photographs. If I can do that with honesty and a faith in my own sense of truth, the smoke and mirrors don’t matter much at all.

LC: How much collaboration was there in this project between you as photographer and the people in the photos?

DD: There are only a handful of photographs in the book that aren’t posed. Even the photographs with kids running around are to varying degrees, set up and orchestrated. When we were working, it sometimes looked like a low-budget film set, while other times we worked simply and quickly to make photographs in the moment. When I came back each summer to photograph, I brought hundreds of small prints from the previous year, so everyone saw the project change and evolve. A few of the prints would be used to re-stage the photograph and suggest new ones.

The process of making the photographs was quite collaborative but the editing, sequencing and the design of the book were done largely my own. Last summer, however, I returned to Cobh with a maquette of the book. I made audio recordings of the stories and thoughts that people made while they looked through the pages. These recordings inspired and informed an illustrated comic/graphic novel that is woven into the sequenced photographs.

The comic is written and illustrated by Dublin based artist, Paddy Lynch who came to Cobh for a few days to make sketches and help with the audio recordings. The comic itself is equal part Paddy’s imagination, my photographs and the recordings of people telling stories. Paddy and I have spent hours and hours on Skype and email discussing the narrative, language and visual aspects of the comic. While he is a late addition to the project, he’s a critical collaborator and completely dedicated to creating a comic narrative that complicates the reading of the photographs and our imagined experience of growing up in Cobh.

LC: Did you always have in mind to make a book? If so, did you create a shot list, describing in general what kinds of photos you would need to create a great rhythm and flow for the story to unfold?

DD: On rainy days (which was often), Ivan and I would sometime sit in a café and make lists of photographs we wanted to make. Occasionally, I made crude sketches. In between summers in Cobh, I poured over the contact sheets, made selections and showed the photographs to other photographers and the occasional editor or curator. The work evolved slowly, and it took me at least the first two or three summers to get a sense of the scope and shape of the project. But it wasn’t until 2013, when I took a year off from teaching, that I began to edit and sequence the photographs for a book.


LC: Was editing and sequencing hard or easy? Did you leave out any of your favorite photos because they didn’t seem to fit in the book?

I spent six weeks at the MacDowell Colony in an amazing studio with a group of very talented and brilliant artists. It’s an ideal place for me to edit photographs (I made the first edit of “all the days and nights” at MacDowell) but it’s never easy and the first few go rounds are pretty rough and need time and considerable tweaking before the edit is good enough to show a publisher.

I have a pile of at least 20 images that could be in the book, and at least another 10 or so, that someone else might consider worthwhile candidates, but that’s how it goes. Editing requires a certain number of painful cuts and more than enough anxiety.

While the production deadlines are looming, I’m still fine tuning the edit. The book design is by Hans Gremmen who has pushed the book and me in remarkably productive directions. Paddy is working out the final inking and color for the comic panels which often suggest, even demand changes in the choice and sequence of the photographs. The good people at Aperture also offer invaluable input and guidance – the book cover, which I love, is the product of considerable haggling between Denise Wolff at Aperture, Hans and myself. We were at loggerheads for months, but as Denise predicted, it all worked out in the end.

I can only hope that holds true for the rest of the book. 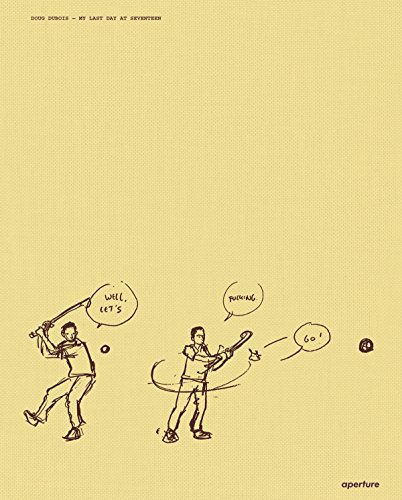