Interview
Fairy Tale from Russia
Cinematic, dream-like shots of Russia—none of them staged—speak to the cardinal importance of composition and the subtle art of “becoming part of the interior.”

Fairy Tale from Russia
Cinematic, dream-like shots of Russia—none of them staged—speak to the cardinal importance of composition and the subtle art of “becoming part of the interior.” 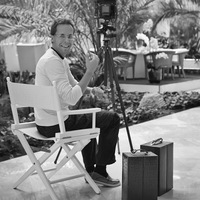 German photographer Frank Herfort has spent over a decade photographing the insides of various public spaces throughout Russia—spaces that, incidentally, are lacking a public. An architectural photographer by trade, Herfort’s personal work pays homage to the old-fashioned, Stainlist decor that still consumes many Russian interiors. Yet Herfort’s work brings a modern twist, seemingly imported from the outside, that eradicates markers of time or context and persuades the viewer to create their own narrative.

Herfort’s previous body of work, “Imperial Pomp” (selected as a finalist in the LensCulture Visual Storytelling Awards 2014), shows a different side to Russia—a hyper-modern terrain that boasts intimidating skyscrapers and a vanguard mentality. The booming, modern external world intensifies the unsettled feeling that comes over the viewer as we witness the apparent bewilderment—and isolation—of the people in “Russian Fairy Tales.” It appears that they are seeking refuge from the looming modernization within the comforting, antiquated remnants of the past.

The surrealist aesthetic denies journalistic fact, yet Herfort successfully captures a bemusement that is shared by members of Russia’s general public. What’s more, he conceptually demonstrates the psychological effects that environments have on their inhabitants.

LC: Did you intend for the dated, neglected interiors of “Russian Fairy Tales” to stand in contrast to the ultramodern, architecturally superior exteriors shown in your previous project, “Imperial Pomp?”

FH: Russia—especially Moscow—is experiencing a particularly strong modernizing movement right now. To me, the city seems much more developed than other European capitals. For example, over the summer, they renovated all the streets throughout the city. In 3 months, Moscow was completely reconstructed. And yet, sometimes it all seems like a facade. Just a few days ago, I was visiting a few houses on Tverskaya Street, one of Moscow’s most famous stretches, yet when I stepped inside, the houses were frequently empty and devoid of life. They were like homes straight out of 1950s Russia. The interior life is often completely different from the exterior appearance.

The two series do complement one another, but “Imperial Pomp” has a different subject—the new skyscrapers constructed after the fall of the Soviet Union. In contrast, “Russian Fairy Tales” focuses on something that I can’t really describe. When I started the project, back in 2005, the project was about waiting rooms and public spaces in Moscow. Yet the work has evolved over the past decade; I gradually sought to erase any indications of context, time or location whilst shooting. My style is inspired by both Stalinist architecture and the modern world, but it’s not really about Russia. Then again, perhaps it’s very much about Russia. There’s no specific political attitude: it’s a collection of individual, fantastical stories.

LC: Your photos have a strong surrealist element to them—such as the elephant in the waiting room. Can you discuss the influence surrealism has had on your work?

FH: I photograph real, unmodified scenes—nothing is ever staged—but am always looking to draw out surrealist elements. My eye looks for incomprehensible situations, moments where you can’t quite put your finger on what’s happening. I aim to make mysterious images from abstract circumstances.

Journalistic photography presents situations in such concrete, definitive ways. Everyone wants things to be clear, they want to know exactly what’s going on—and yet, you can always see things differently. If you just turn a little, if you just change your perspective slightly, an image can turn into something completely different.

LC: You have such an eye for symmetry and design—everything is perfectly aligned. It’s quite a persuasive visual technique because it almost normalizes the bizarre elements in your images. Can you discuss your use of symmetry and how intentional it is?

FH: I take every shot from a tripod and carefully organize the composition of each element in the picture. I do a lot of architectural and interior assignments, so this methodical procedure is probably influenced by those commissions. Regardless, I always shoot in a slow, considered way.

It’s also important to take sufficient time in each location. If you wait for a long time in one place, you eventually become a part of the interior—people stop paying attention to you.

Becoming invisible is a traditional photographic technique, and it’s crucial for my work. Sometimes it can take 3 hours to make one picture.

LC: Is the project shot on film?

FH: Partly—I made my early shots on a 4x5 large format camera and a Hasselblad 6x6. My most recent work was taken with a medium format, architectural camera, but with a digital back. It became so expensive to shoot on film, but I wanted to preserve the depth and range of color that large-format offers. The digital back gives me more freedom. Today I feel comfortable shooting digitally, but it took many years to find what works. It really is a different medium!

LC: Your depictions of public spaces are often devoid of people, and overall the shots feel sparse and isolated. There’s a sense of confusion—your subjects look somewhat misplaced within their environment. Can you discuss this?

FH: I started this project aiming to photograph public spaces in Russia, but I quickly noticed that metro stations, waiting rooms, and other communal areas were lacking a “public!” They just weren’t populated. As a result, I became interested in placing importance on the interiors. These spaces would go unrecognized if the shots were overcrowded.

As such, the people I photograph are disconnected from the spaces they inhabit. It looks as though they were dropped into the scene.

LC: What’s happening in the photograph titled “Dreaming?” [above] It’s such a striking image…

FH: I was on an assignment for a German magazine, and we visited a school for young boys who had decided to pursue careers as policemen. They live, study, exercise, train and are educated on a big campus. We were given a tour and shown these psychological rooms. A woman who monitors the boys’ mental health spoke about an audio-visual treatment that the school provides. I asked to photograph the boys receiving the treatment. It’s a room for relaxation—they turn the lights down and play music. There’s a light panel where they can choose from a selection of relaxing images. It was sort of psychedelic; more like a Berlin party than a military base!

Editors’ Note: This project was recognized by the jury of the LensCulture Emerging Talent Awards 2016—don’t miss the work from all 50 of these outstanding, international talents!

If you enjoyed this article, you might also like one of these previous features: Days of Night/Nights of Day, Elena Chernyshova’s sublime series shot in the northernmost city in the world; Days of Melancholy, striking portraits of gay men living in Russia, where 74% of citizens think that homosexuals shouldn’t be accepted by society; and 7 Rooms, a project that follows seven young people from Russia caught between the Soviet mentality and the new Putin era.