Feature
Echoes of Lofoten
After World War II, families in small and remote fishing villages in Lofoten, Northern Norway, were offered a lump sum from the government to leave their homes and relocate to more central places in a plan to modernize the nation. Photographer Hebe Robinson re-connects those hardy souls with...
Photographs and text by Hebe Robinson
View Images

This was part of the governmental plan to centralize and modernize the nation after the Second World War. Communities that had survived for centuries in a hostile environment on the border between steep mountains and rough sea, totally isolated during the winter months, collectively decided to leave.

Neighbors and friends through generations packed everything they owned and left their homes and each other. Villages were totally abandoned within months. Due to shortage of building materials, they dismantled their houses and brought their homes with them as well, leaving only foundations. The traditional self-sufficient ways of life were lost, and a part of the coastal culture with it.

In this photographic project, I am bringing families and their lives back to the villages they once lived. Historic photographs from these places are returned to where they once were taken, linking past and present. The project is about passing of time, history, destinies and changes in society. Pictures and their histories are from descendants of those in the pictures.

— Hebe Robinson
Edle, Anne and Fredrik were the last generation growing up in Hermannsdalen. From November until April the family lived completely isolated. When Edle was eight years old, her grandfather took her and her sister Anne to the top of the mountain. From there, they could look down on their neighbours in the village Vinstad. She had never seen other houses before. © Hebe Robinson
Family and friends had walked for hours to help the family living at Bunesstranda to get the wood for the winter indoors. Rowing the wood in open sea was dangerous and the trip probably took more than 10 hours. © Hebe Robinson
The wood gathering party poses for a group photograph. © Hebe Robinson
Johan Kristian Alfred Nilsen married Hanna Sofie Petersdatter. They had seven children and a foster son. Kristian was killed in 1944 by a mine that had been washed ashore by a storm. He was standing outside his house when it exploded. Three days before the accident, he wrote a letter to his daughter where he praised God for having such patience and not punishing them for their sins, but protecting them from accidents and illness. © Hebe Robinson
Kalle and Astrup drinking outside the barn. After a long and isolated winter, it was time to enjoy the company of friends and family. Parties were arranged, although the guests had to walk for four hours to get there. In the midnight sun they danced to music from the wind up gramophone and drank homemade rhubarb wine. © Hebe Robinson
Haying in Hermannsdalen. The hayfields were rich and fertile, but hard to get to. The men had to tie ropes around their waists on the steep hillsides. Two of the girls from the farm in Hermannsdalen are posing with three young men helping out during the haying. © Hebe Robinson
Heiderg, Jacob and Fredrik are visiting the Myhre family. Visitors were rare, and a good opportunity to bring out the camera to document the happening. © Hebe Robinson
Jørgine gave birth to eight children in this house, and she herself was born here. She lost three of her daughters here, too. Her daughter Fredrikke died in the winter at the age of 16. They had her lying in a shed as it was impossible bring her to the churchyard until spring. Every night her little sister Anne went to her to say goodnight. Jørgine is projected on the wall of her home for 90 years. © Hebe Robinson
German soldiers are in Hermannsdalen to detonate mines that had been washed ashore. Gustav and his son Fredrik did not want the soldiers to enter the house. They were not considered guests. And inside, Jørgine, now close to ninety years old, laid in bed pretending to be ill with an illegal radio hidden under her blanket. © Hebe Robinson
Mathilde was shy in front of the camera. © Hebe Robinson
Alfred, Arne, Roald, Arnolda, Nanna, Torleif, Jon, Finn and others, out walking, probably on a Sunday after church. © Hebe Robinson
Klara with her brother Almar. © Hebe Robinson
Amanda, Arthur, Tyra and Elise Kuntze (1932/2010). © Hebe Robinson
Cousins Klara and Alf go skiing. © Hebe Robinson
On the way home after a party at Magne and Åsberg. © Hebe Robinson
The women's association, preparing food for a social event. © Hebe Robinson
Fair weather party. © Hebe Robinson
The house belonged to Karla and George Gabrielsen at Helle. The community collectively decided to move from the village as they were given a lump sum from the government to do so. Families that had been neighbours for generations packed everything they owned and left. The village was deserted within a few months. Karla and George dismantled their house and rebuilt it at Sørvågen. © Hebe Robinson 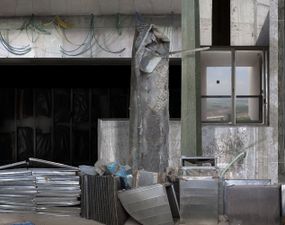 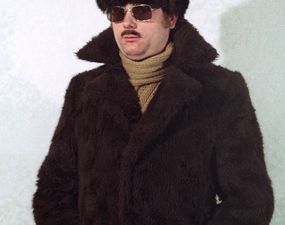 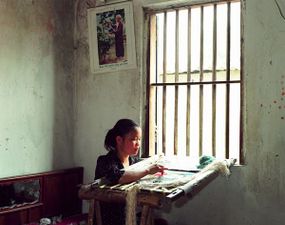 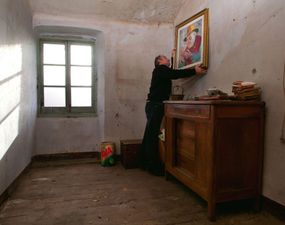 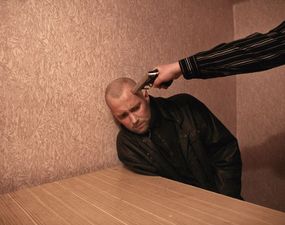 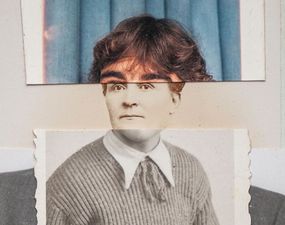