Book review
Asakusa Portraits
No doubt, this the best photobook to be published in 2008. After working in near obscurity for 30 years, Hiroh Kikai has emerged as a modern-day master portrait maker, patiently documenting eccentric people who pass through an old neighborhood in Tokyo that used to be the city’s entertainment...

Asakusa Portraits
No doubt, this the best photobook to be published in 2008. After working in near obscurity for 30 years, Hiroh Kikai has emerged as a modern-day master portrait maker, patiently documenting eccentric people who pass through an old neighborhood in Tokyo that used to be the city’s entertainment district. He’s in the same league with Diane Arbus and August Sander. Read the book review, plus a great interview with Kikai by Marc Feustel.

Asakusa Portraits by Hiroh Kikai is my absolute favorite photobook from 2008.

When I opened it for the first time, it felt like a big, important discovery. And the more time I spend with it, the richer it gets. It is so alive and compassionate and touching and funny all at the same time!

The concept is simple yet disciplined: Over the course of more than 20 years, Kikai made hundreds of portraits of eccentric strangers who happened to be walking past a temple wall where the photographer likes to hang out in this small tourist town near Tokyo. He waits patiently for several hours at a time. Some days he makes one or two portraits. Other days, no portraits at all.

He says he waits to see an “aura” around a stranger that signals “take my picture,” and then he approaches his subject to ask permission. The vermillion colored walls on the outside of the temple form the neutral background for each portrait. Kikai holds his Hasselblad in his hands, and engages the stranger in small talk while he makes some exposures. In less than 15 minutes, the portrait session is over, and the person has disappeared into the crowd of tourists again. Kikai makes some notes from their brief conversational exchange, and these notes often become the wry captions that enrich each photo.

Everything about this book is perfect. The generous (yet tightly edited) selection of photos flow naturally from one to the other with thoughtfulness and wit. (Sometimes the same person has been photographed in the same spot 15 or 20 years apart, and these are presented side by side.) The prints are stunningly beautiful. Short quirky captions provide an enormous amount of extra personality for each of these characters.

A lively, intelligent interview with the photographer is included after an insightful introduction. We are even treated to some short, funny diary-like essays written by Kikai himself.

In the interview at the start of the book, Kikai talks about his discovery of photography:

When I graduated from college, I thought of the real world as my ultimate playground, and I began to think about the path I would take to express something about that world. To support myself, I worked as a truck driver and factory worker, all while seeking my path. Then I came across a photography book by Diane Arbus. Up until then, I had thought of photography as having a more limited vocabulary as compared with film, but Arbus’s photographs shocked me. I was surprised that there were photos out there that I didn’t grow tired of looking at. Her images sent a shiver down my spine.

Later, in the same interview, he talks about a new technique that tickled him:

For quite a while, I’d been thinking about taking a single portrait of a couple or a husband and wife. The first photographs of this type seemed didactic and uninteresting. So I decided to take them in a separate frame and then put the two pictures next to each other.

I tried it out right away. A husband and wife came by without any kids, yet holding a huge doll, and I took some pictures of them separately. For the wife’s caption, I wrote, “A woman who told me she’d been raising a doll for twenty-eight years.” For the husband, “Her husband, who’d been living with the doll for twenty-eight years.” When I put them next to each other, my imagination started to jump all over the place and I came up with this scene in my mind that every time the wife changes the doll’s clothes, the husband gets drunk and watches television shows next to her.

Obviously, he can be sensitive and irreverent at the same time. Hiroh Kikai is right up there with Arbus and August Sander as a master portrait-maker, in my opinion. His aesthetic, coupled with his sense of personal warmth and humor, make these portraits into timeless gems.

If you buy just one photobook this year for yourself or a friend, consider this at the top of your list.

Kikai has published a lot of other photobooks in his native Japan, but for some reason he did not find international acclaim until 2008, and his books rarely made it outside of the country. I’ve recently purchased two other books by Kikai that were published in Japan (Tokyo Labyrinth and Tokyo Mutan / Labyrinthos). Kurt Easterwood turned me on to these beautiful (but more expensive) books that are available through his excellent website, Japan Exposures. The photos in these books are almost completely devoid of people, yet quite compelling in other ways.

And, be sure to read this other great interview in Lens Culture with Kikai. Marc Feustel, an expert on Japanese photography, interviewed him in 2008. The interview includes 10 additional photos by Kikai. 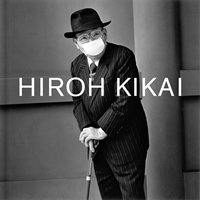