Book review
Provocative Generosity and the Joy of Scope: Meyerowitz’s “Where I Find Myself”
A new, retrospective book looks back at master photographer Joel Meyerowitz’s career: not just his greatest hits, not every photograph he’s ever taken—but the pictures that really matter.

Provocative Generosity and the Joy of Scope: Meyerowitz’s “Where I Find Myself”
A new, retrospective book looks back at master photographer Joel Meyerowitz’s career: not just his greatest hits, not every photograph he’s ever taken—but the pictures that really matter.

I should begin with a confession. I am no great fan of Greatest Hits albums. Looking at my music collection, it seems I own a number of them, yet not one of them calls for my continued attention. There is, in each of them, something missing. There is no B side. There are no mistakes, no experiments; there is no filler, no music that plays at or caresses the edges. Every song is a success, yes. But listening to these albums isn’t even nostalgic—at least not for me. They feel a bit expected and contained. I know every note. What they lack is scope and range and surprise. I think I bought them out of fear.

Across the room, though, I look at my books and discover the shelves are filled with anthologies. Best Essays. Best Travel Writing. New and Collected Stories, Essays or Poetry by authors reaching the mid-point or later stages of their careers. And every one of these books makes me smile. There is, in every one of them, work I have not read before—even if I know the authors well. There are curiosities and loves and disagreements in there I have not yet imagined. There are arrangements and juxtapositions that leap toward some new insight.

I make this distinction because I have on my desk the new book by Joel Meyerowitz: Where I Find Myself. This book is big. At three hundred and fifty-two pages, with four hundred images, this isn’t a book for a flimsy coffee table. Think oak, instead.

According to a press release, the book, “published to coincide with the photographer’s 80th birthday, spans Meyerowitz’s whole career in reverse chronological order, including his harrowing coverage of Ground Zero and his iconic street photography work.” With this preview, I opened it fearing a greatest hits album, work I had seen before. What I found instead was an evening (which turned into several) of discovery and reintroduction. More importantly, the pictures I knew and the pictures I did not are placed in a historical context —the author’s career—I had not seen them in before. So let me say it plainly: Joel Meyerowitz’s Where I Find Myself is a compelling, wonderful, deeply pleasing collection of an essential photographer’s work.

The book is organized in reverse chronological order, starting with his most recent work. Chapter One is called “The View From Here: 2017-2012.” The final chapter is “Out Into the Street: 1964-1962.” In between are “Elemental” (which contains his work at Ground Zero after 9/11), “Portraits,” “America in the Time of Vietnam,” “On the Road” and others. The borders between the chapters are not rigid.

Chapter One is, for me, the most surprising. It contains most of the work I had not seen before, and work that is most unlike Meyerowitz’s previous attentions.

Meyerowitz writes, “How did I get here? Living on a farm in Tuscany. Nearly 80 years old, and once again the force of photography provokes me to think about something I’ve never considered as being of interest to me. I’ve always been a street photographer, first and foremost, and although I’ve danced to tunes other than the jazzy tempo of the street, it’s where my native instincts for seeing first developed….So how is it that I find myself here, now, moving cast-offs and flea-market objects around on a table top, watching them come alive or interact with other oddities as they murmur of their histories and show themselves to me in the silence of the studio? The element of chance—which, to me, is photography’s greatest asset—has once again spun me around while slipping a fresh question into my mind.”

This is one of the things I love about this book—the sense of freshness and discovery. Meyerowitz goes on to explain how he found old objects—tin and brass and pewter-looking canisters he thought a friend would enjoy, and how those objects then provoked an idea, how the idea and outside temperature created the need for a studio, and then presto! A new direction and perhaps aesthetic for his work.

I should note that I do not normally enjoy still life paintings. Perhaps it’s just my own lack of imagination, but to me there’s very little to say about a bowl of fruit that goes beyond technique. Yes, the brush strokes are masterful, and the way light and shadow play are sophisticated, yes, yes, yes—but it’s still just a bowl of fruit. However, I do not feel this way about these photographs. Each one is moody and rich. I find myself stopping over these images, inspecting them, and smiling.

Chapter Two, “Elemental 2010-2001,” brings us to work more well-known—his photographs of the aftermath of 9/11 paired with his photographs of Tuscany. The intent here is that one set should reflect and inform the other. It’s a complete change of tone from Chapter One. And the distance between them creates a certain kind of space that is the true subject of this book—the evolving vision of the photographer. When I try to put Chapter One after Chapter Two, as is the case in his life, I get to wondering about the artist himself. Suddenly, there is a whole new topic in the air.

I had worried, when I learned the book was in reverse chronological order, that every chapter deeper into the book would feel a bit less relevant, a bit less connected to the snowfall I see out my window this evening. Instead, each developing chapter uncovers new layers. A bit like archaeology, perhaps, each following chapter reveals a foundation for what I see in Meyerowitz’s work today, provides reminders for where we have been, offers evidence that there are always other ways of seeing the patterns that make up the world.

Chapter Three, “Cities 2008-1976,” is where the book changed for me. These pictures are fascinating, complex, playful and oftentimes fun. In photography, we speak about depth of field—what I would like to offer here is a request to talk about depth of content. Perhaps it is only because I know from personal history most of the places he photographs, but I find myself lingering over every image. I am not so much searching for meaning as I am deeply enjoying the detail, the placement of major items, the complicated mood.

New York, St. Louis, Atlanta, St. Petersburg—I told a friend of mine there are harmonies here. And I don’t mean between the pictures, although there are certainly those currents too. I’m talking inside the images.

It would be tempting to think, again, about every image as an image in and of a particular social moment. Yes, that’s part of the joy of this book.

But really the subject of this book is the weight and richness of history. Meyerowitz sits at the foundation of a lot of what we assume about photography. A chance meeting with Robert Frank got him going. Later, he hung out with Garry Winogrand and helped push the borders of street photography. He challenged the way we think about color. And he set his own voice, too. He writes, “I was letting go of what I already knew how to do, to see what else could be said photographically, without using the familiar tactics and language of Henri Cartier-Bresson or Robert Frank.”

Where I Find Myself isn’t just the greatest hits. It’s certainly not every photograph he’s ever taken. But these are the ones that matter.

As he says at the end of his commentary for Chapter One, “It is here that I now find myself, once again loving photography’s provocative generosity.”

This, of course, is what the book is all about.

Where I Find Myself is available from Laurence King Publishing 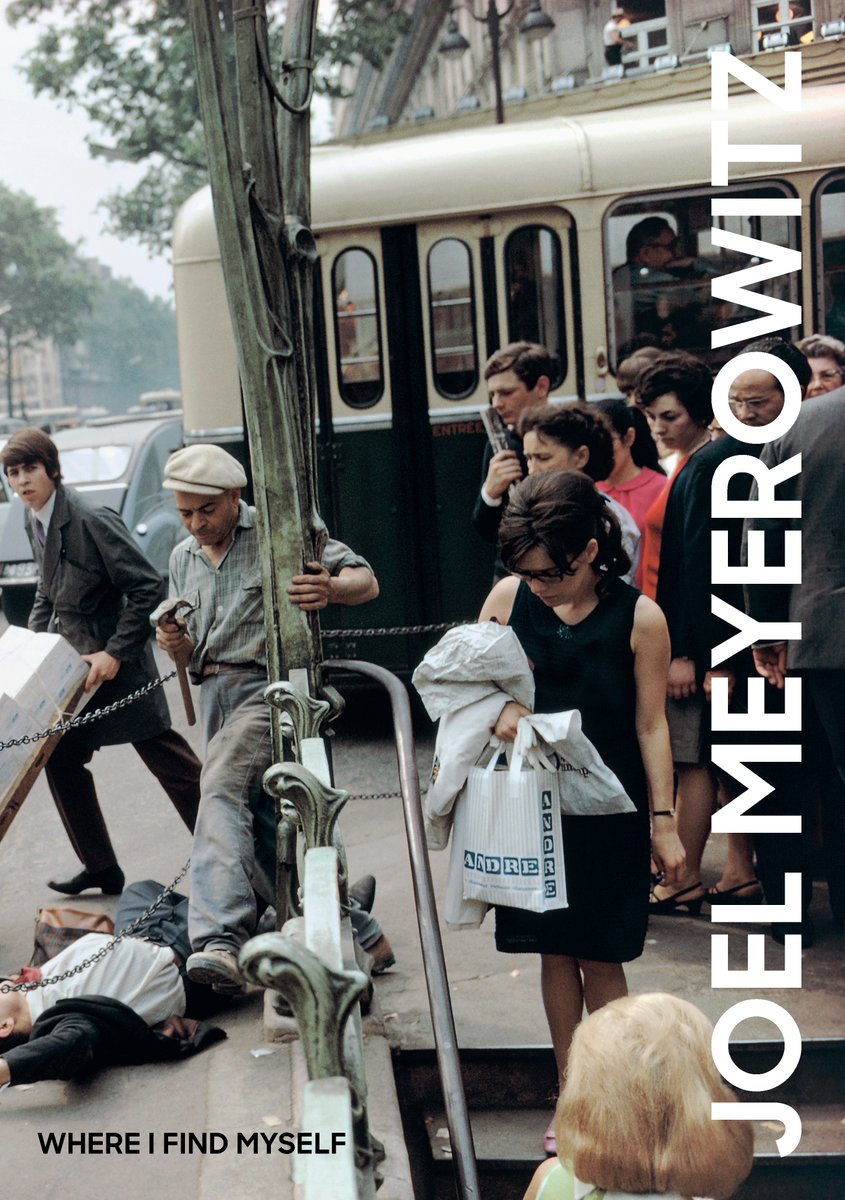 Where I Find Myself
by Joel Meyerowitz
Publisher: Laurence King