Book review
As it Seemed
Poetic and evocative, Jonathan Levitt’s new book “Echo Mask” takes us on a drift through moody maritime landscapes and the wilds of nature around Maine and Newfoundland.

As it Seemed
Poetic and evocative, Jonathan Levitt’s new book “Echo Mask” takes us on a drift through moody maritime landscapes and the wilds of nature around Maine and Newfoundland.

We often ask the most difficult question first. Our lover, friend, beloved comes home from some event and before anything else we ask “How was it?” Not what. Not who. But how. We want interpretation, analysis, judgment. We want to know the mood straight away. Fine. Horrible. Changed my life. Couldn’t wait to get out of there. Awesome.

Of course, the conversation then races backwards, providing the details to support the claim. But it’s that opening bit of interpretation that frames the rest of the conversation. Basic claim and support. Few things are clearer. Yet few things, if done well, are more complicated. Every claim is founded on a lived experience up to that moment. Every support should attempt to unravel that lived experience.

According to its promotional material, Echo Mask, by Jonathan Levitt, is a new book of photographs, published by Charcoal Press, taken primarily in the Maritime Northeast between Newfoundland and Maine, and around the mangrove islands and hardwood hammocks of the subtropical Southeast.

“Inspired by natural history, mythology, and a primordial view of the natural world as a place alive and enchanted…,” the description reads, “Levitt went looking for the endangered and haunted places—natural landscapes still enlivened by intact habitat and the corresponding wild animals. The resulting images: gannets soaring around their nests at Cape St. Mary’s; a humpback whale in the rain near Grand Manan Island at the mouth of the Bay of Fundy; wading bird rookeries in the cypress swamps near Chokoloskee in Florida, are presented in a sequence meant to evoke elements of animistic art and fossils of classical poetry from oral cultures—particularly synesthesia, transmogrification, onomatopoeia, and a non-linear sense of time.”

The images are mostly black and white, though there are several color images made even more striking in context. More often than not, there is only one right-hand image in an open spread, though there are occasionally left and right pairings. Sometimes a single image fills the whole space. Without exception, though, the images are evocations more than representations. Many are heavy with grain or haze, underexposed, sometimes blurry.

Remember the question? How was it? These photographs are an attempt to capture the mood of a place; the feeling we get when we try to explain not what a place was, but what it was like. The order of the photographs has nothing to do with a developing narrative. Like memory, the images circuit around each other until a chord appears.

Small blocks of text appear in the book. Like the images, they are more like language poetry (where words are chosen more for sound than linear image-building and whatever association a listener makes between them is unique) than caption or description or narrative. There is some connection to the photographs, but not always. They serve as tone-moments.

Echo Mask is a book about mood. The mood is not joyful or nostalgic. Nor is it angry or loving. This work is brooding, lonely, decaying. None of the images grabbed me, convinced me I was listening to a special and unexpected voice. But perusing the book did evoke old memories, both real and desired, and emotions about my relation to the places I have lived.

An echo mask, by the way, is a real thing. According to the website of the Stonington Gallery in Seattle, they were used primarily by the Nuu-chah-nulth and Kwagiulth peoples of the Pacific Northwest. The wooden masks had interchangeable mouth pieces which would allow a dancer to portray multiple characters with one mask. I’m not sure at all that this helps understand the book. However, I’m mostly sure this is the wrong question. 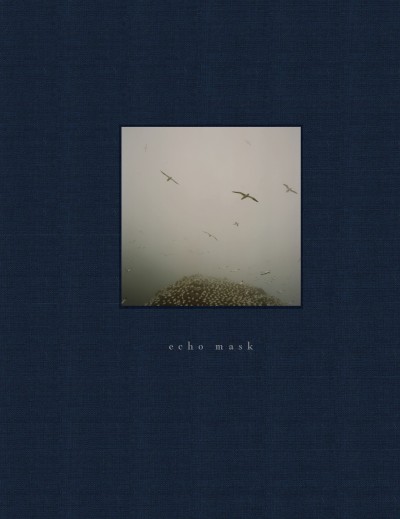