Feature
How Exhibitions Are Built: Interview With Cyril Delhomme
Going behind the scenes with Le Bal’s talented and unconventional exhibition designer in order to understand just how the performative space of the exhibition space comes into being with each new show.

Behind the scenes at Paris’ Le Bal
Text by Alexander Strecker

How Exhibitions Are Built: Interview With Cyril Delhomme
Going behind the scenes with Le Bal’s talented and unconventional exhibition designer in order to understand just how the performative space of the exhibition space comes into being with each new show.

Paris is, undoubtedly, one of the world capitals of photography. From the countless galleries scattered across the city to important photo-specific institutions—Maison Européenne de la Photographie, Jeu de Paume, Paris Photo—and the world’s largest picture collection at the Bibliothèque Nationale, the city’s claim to both the medium’s past and present is strong at hand.

But there is one small, relatively new institution that has been making its mark in an already crowded scene: Le Bal. Opening its doors in 2010 as “an independent venue for the document-image,” the polyvalent exhibition space has continued to grow in confidence and verve, especially in the past few years.

Founded with the wide-ranging mission of presenting “the visual ‘document’ in all its forms, still and moving,” the venue has been host to a range of artists, from classic names (Chris Killip, Paul Graham, Lewis Baltz) to the emerging and experimental—Noemie Goudal, Samuel Gratacap. 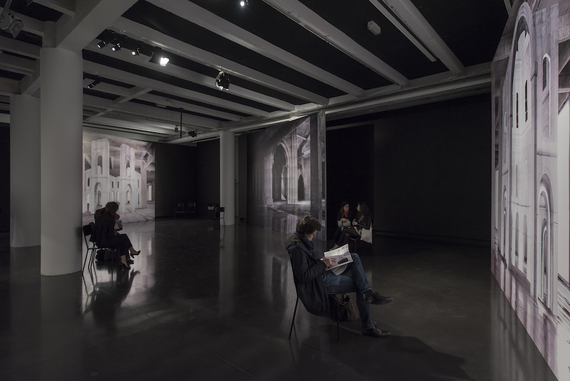 One key component, among many, to the space’s creative renaissance has been Cyril Delhomme, the ambiguously titled “scenographe-régisseur.” This job title, which has trouble in translation, roughly amounts to “set designer-studio manager.” As the space’s own team page shows, Delhomme is in a category by himself, a one-man show in the “régie” department (régie—theater management?).

Strange as it may sound, this curious, open-ended role could not be more fitting for Delhomme. Over the course of a lively two-hour exchange, Delhomme underlined again and again how important a sense of variety, vitality and performance is for the visual arts.

The long-running divide between “les spectacles vivants” [live performances] and “les arts visuel” [the visual arts] has been detrimental to the latter, leaving it stuck on the wall and ceaselessly bound up in frames.

All of this fits nicely with Delhomme’s conception of what a scénographe (theatrical set designer, traditionally, but more recently a museum exhibition designer as well) should do. In his words, “Producing an exhibition is a bit like writing a screenplay—you sketch out the actions and the words and then hope people follow the directions. But you also leave space for surprise and improvisation.” 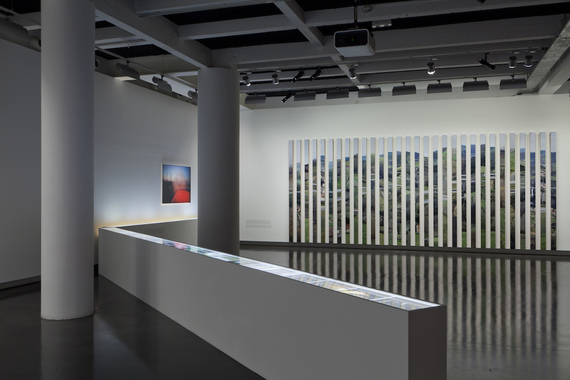 Delhomme thinks of film frequently when laying out the exhibitions: he is particularly inspired by old Japanese films or the work of Italian theater/opera/cinema director Luchino Visconti. “The final ensemble is a question of how to create atmosphere, like when creating a film.” In his mind, an exhibition space offers us the opportunity to re-create the visual impact of cinema—but in the physical space of a gallery.

Besides film, Delhomme is also deeply influenced by architecture—the writings of Louis Kahn in particular. He notes, “Exhibition design is like drawing into space. The key questions are what will be there, and what space you leave for the circulation of people. It’s like architecture, which is just as much about the solids as it is about its empty spaces: light and flow. I want to pull people through but also let them explore in their own ways.”

Delhomme’s inspirations do not stop at the frequently cited sources of art and performance. Rather, his incredibly diverse life experiences inform every aspect of his work at Le Bal. Take, for example, a period in his early 20s, when Delhomme lived in a squat in London. To pay the bills, the squat would organize concerts and sell tickets. Today, Delhomme helps organize concerts and other live events at Le Bal, which inject the programming with originality and, well, life.

Other stops in Delhomme’s serpentine path also make themselves clear in his work today—assisting a New York Fluxus artist in the late 80s; a long stint at a documentary film studio; years spent traveling in East Asia and supporting himself as a freelance graphic designer; a key period working as a painter’s assistant in South Korea. Finally, he found his way to Le Bal and began working as an installer. His contributions to the exhibitions built slowly over time—an inventive idea here, a creative solution there—until he had helped redefine notions of what an exhibition at Le Bal could look like. 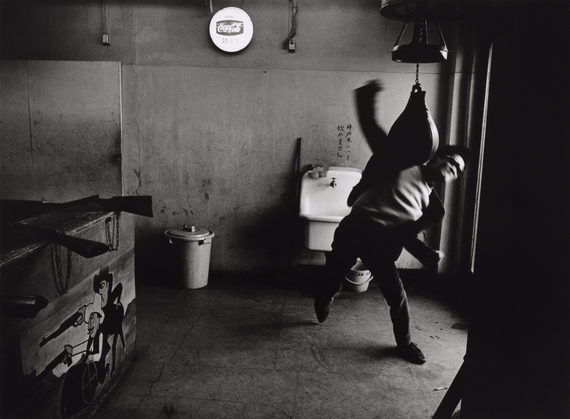 Take the latest exhibition, “Provoke,” an examination of an influential—yet short-lived—Japanese magazine/movement from the late 1960s. At another institution, the resulting images might have been stuck on the walls in neat rows and tidy sets. Fitting, yes, for how we think a museum exhibition should look—but completely deadening and anathema to the very meaning of Provoke.

Indeed, Le Bal’s take on Provoke, with ample input from Delhomme, takes on a much more immersive and contemporary feeling. In the first room, for example, we find a structure that resembles a rural hut; it has multiple openings and functions as communal gathering point. Inside, a film about a farmer’s protest against efforts of development is being screened. While it sound highly specific, thanks to the material hanging on all the surrounding walls, the exhibition design gives us reason to circulate around the room. Meanwhile, since the “screening room” is so permeable, we find ourselves overhearing a snatch of conversation or seeing a tempting fragment and are subsequently pulled into the struggle. As this was the central tenet of Provoke—a wide-ranging reaction to the social and political turmoil rocking Japan—the temptation to partake in the resistance is fitting.

In the second room, we discover the magazine itself, published only four times but leaving in its wake a massive influence (in the words of Nobuyoshi Araki, “really [Provoke] was like a bomb”). Like the film, the magazine is not limited to its original confines. Rather, giant, blown-up images from its pages are wallpapered around the room, and the movement’s concurrent artistic influences ring the walls to the outside. 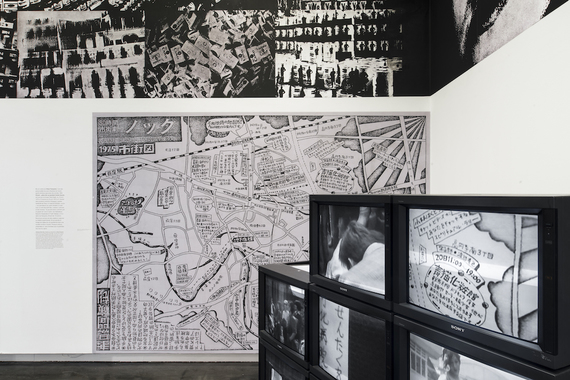 For example, an array of eight TVs in the corner is representative of Delhomme’s approach. At another institution, these might be lined up in a row, each screen with its own set of headphones. But no—these TVs tell the story of a bizarre, surreal street theater performance that played out in the public space of a Japanese city over the course of 24 hours. And thus, the TVs are grouped together to produce a lively, if overwhelming, barrage of sound and image. They catch your eye even as you descend the stairs to the second room, and their noise fills the space. As a viewer, one can’t help but be provoked to think about the diverse, even aggressive, forms this movement took during its brief but influential life.

In the end, Delhomme’s animating philosophy of exhibition design is simple: all art is performance and needs to be treated as such. The space of a museum or a gallery is a space that should be manipulated and shaped and brought into being anew, depending on the context and content. The idea of considering art in situ is essential.

At the end of our time together, I asked Delhomme if he had a dream space he would like to work in some day—something like the Grand Palais, with its monumental volumes and unique backdrops. Fittingly, Delhomme fell back on his clear-sighted, problem-solving nature again. “No, I don’t dream of that. I prefer the limitations of Le Bal. 300 square meters on two floors. It’s like life: I’m given materials, a context, a space and I make what I can from it.”

Editors’ note: The exhibition ”Provoke” will be showing at Le Bal until December 11, 2016. 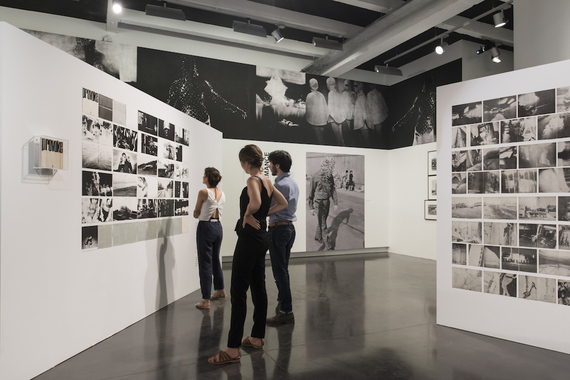