Interview
ABQ
Lewis Khan’s latest project transports him to a desert city, thousands of miles away from his London home and locally-based projects. In this unfamiliar terrain, he discovers community among strangers.

ABQ
Lewis Khan’s latest project transports him to a desert city, thousands of miles away from his London home and locally-based projects. In this unfamiliar terrain, he discovers community among strangers. 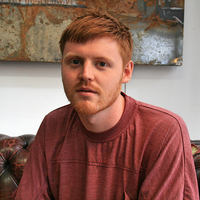 Lewis Khan is a photographic artist born and raised in London, working with stills and motion. His portrait-based practice is a study of emotion, relationships and belonging. With a keen eye for observation and a personal interest in community as a driving force in his work, Khan’s work acts as social commentary shaped by time immersed in the places, groups, and relationships pictured in his photographs.

In ABQ, he diverges from his studies of British life to the US to document a series of meaningful encounters with the people and places of Albuquerque, NM. Ready to face the unknown after a prolonged period of working close to home, Khan’s initial plans to journey around New Mexico melted to the side as he became fascinated with the city of Albuquerque. Over a two-week period, he explored the city and its edges. The resulting images are the starting points of a relationship to place.

In this interview for LensCulture, Wesley Verhoeve speaks to Lewis about the beginnings of ABQ.

Wesley Verhoeve: Lewis, can you tell us how you arrived at your ongoing project ABQ?

Lewis Khan: I was drawn initially to New Mexico by a fascination with the desert. I was interested to see how western human intervention interacts with, and crosses over into, that terrain. I felt like creatively I needed to put myself in a totally new and unfamiliar environment; I hadn’t traveled for a few years because of Covid, and coupled with that I had been making work in that time that was very much focused around my local community and my life personally.

So it was a bit of a different headspace kind of trip. I had initially planned to travel around the state, driving and stopping, not having too much of a schedule. In the end I got totally wrapped up with things in Albuquerque, which is where I initially flew into. I would extend my stay there by a few days every couple of days. Eventually that was the whole trip.

WV: Can you describe your work process while out taking photographs in these new surroundings?

LK: It was a very organic process; a lot of walking, a lot of observation. I had purposefully gone to a place where I was an outsider, without any previous connections or people I knew. So it was a lot of slowly feeling my way around, taking in the new environment I was in. I had intentionally set myself out to work in a slow and deliberate manner, looking for stillness and beauty in the people and landcapes I was photographing.

WV: Did you notice any difference in how people responded to you in Albuquerque compared to when you make similar work in London?

LK: When I’m working in London, I have the thing of being from London, so there is often a level of relation that already exists there. It’s a common bond which is helpful for making the work. In Albuquerque it was the opposite; it was about how people reacted to my status as a random outsider. That aspect of being from abroad was often a talking point, especially as I spent a lot of time around the edges of the city. People were often just genuinely curious—what are you doing here?

I ended up on a bunch of people’s Instagram and Snap, in selfies with them, and in little videos posed next to my camera saying “hey” to their followers from London. In a way, being an outsider affords you a level of naivety that as a local you haven’t got. You can be honest about being from somewhere else and not knowing the place well. It can be quite disarming.

WV: What were the main challenges you faced taking portraits in an unfamiliar place?

LK: Although people were super friendly once we were chatting it was at times difficult to get talking in the first place. Due to a few factors, people weren’t really out in the street mingling and hanging out so much. I felt this was partly because of Covid and people wanting to keep that physical distance from each other, partly because it was winter, and also I felt that the culture of how people use public space is different in Albuquerque to how it is in Europe. Things felt more focused on private spaces—home, car, destination—with the spaces in-between more like ground to cover than spaces to spend time in.

Slowly I started to come across spaces where people were naturally gathering. One laundromat I went to immediately had the feeling of a social hub. Stepping in from the snow, the warmth from the dryers was inviting, and the washing powder smell gave the place a homely feel. People were gathered round watching TV together while waiting that half hour for their washing to be done. Someone showed me how to use the machine that changes notes into quarters and what all the different detergents were. I sat and chatted for a while and later met Dianna there, whose portrait is part of the series.

WV: What has been the most fulfilling aspect of taking photos in Albuquerque?

LK: Making those meaningful connections with people. Being the outsider, you haven’t got anyone to rely on or fall back on. You do feel very much like you are on your own. And so when you do, by some stroke of serendipity, meet someone and it does feel meaningful and affecting, that feels really special.

WV: This is a self-assigned personal project. Are you approaching it differently from client work?

LK: I wouldn’t really say so. The obvious difference is that you’re not working to a set brief, but as you go you are constantly evaluating and defining—which is a brief in itself in the end. I probably made less pictures than I would if I was doing client work. Shooting this I was figuring out what I was doing whilst I was doing it, so there are more dead ends, and more times when I decided at the last minute not to take the picture. Client work is mostly more mapped out beforehand.

But in terms of the actual substance of the photographs, that is unchanged across both ways of working. It’s still driven by an interest in emotion, relationships, belonging, and a physical immersion in the places, groups, relationships I’m photographing.

WV: Do you plan to return to the states to make more work or do you consider ABQ finished?

LK: I see the photos from this trip as the starting points of a relationship to place. They’re my first impressions. While I was in Albuquerque I met a group of social justice community activists and together we’ve been planning a project we will work on together. So that would be a return trip, and these photos will feed into that project for sure.