Book review
Field Trip
Each image in this real-life documentary photobook about Israel has a surreal edge to it. Combined, they build into a sweaty-palm, fever-dream composite of a society gone wrong. David Lynch would be hard pressed to create more convincingly weird images.
Photographs byMartin Kollar
View Images

Field Trip
Each image in this real-life documentary photobook about Israel has a surreal edge to it. Combined, they build into a sweaty-palm, fever-dream composite of a society gone wrong. David Lynch would be hard pressed to create more convincingly weird images.

Field Trip is a remarkably strange, disturbing and enlightening photobook — and it's one of LensCulture's favorite books for 2013.

We witness military training exercises, and the remains of weapons and munitions scattered in barren landscapes or piled up with domestic garbage. We’re assaulted with images made in animal hospitals or science labs, and with portraits of humans being probed by menacing-looking scientific wires, tubes, hoses and clamps.

Bombed-out neighborhoods are littered with spontaneous absurdist art-like installations — constructions of debris gathered together to act as what? Barricades? Barricades to what? For what reason? We’re not sure if they are intended to be real, or ridiculous and futile.

Not one of these photos connects with what everyday ordinary life is like for most of us, and none are the typical kind of photographs you would expect in a report on contemporary Israel. But that is exactly what they are — documentary photos of contemporary Israel.

Yet the photos are completely devoid of verbal context — no captions, locations, or descriptions. Nowhere in the text, except on the very last page, is there any mention of the fact that every one of these images was made in Israel in the past two years.

Slovakian photographer Martin Kollar captures all of this crisply, colorfully, in the harsh sunlight of a desert land, or under the garish green-tinged fluorescent lights of scientific laboratories, hospitals, bunker-like homes, and factories. Each feels like a brilliantly-lit deadpan setting for non-stop existentialist drama.

Kollar was one of 12 photographers commissioned for this in-depth photographic study of Israel, and he spent a year there, reducing his findings to this perfect 76-page book of near-silent testimony of madness. Each image has a surreal edge to it, and combined, they build into a sweaty-palm, fever-dream composite of a society gone wrong. David Lynch would be hard pressed to create more convincingly weird images, but these are all real documents from a world that really exists.

Field Trip is part of a project entitled This Place, which explores the complexity of Israel and the West Bank through the eyes of twelve internationally acclaimed photographers, their highly individual works combining to create not a single, monolithic vision, but rather a diverse and fragmented portrait, alive to all the rifts and paradoxes of this important and much contested place.

Frederic Brenner, the French photographer, conceived of the project, arranged the funding, and selected the participating photographers. He said, Israel is “a place of radical otherness and unbearable dissonance. There is beauty in dissonance…I did not bring people here to see the land of milk and honey. I brought them here to see the land that devours its inhabitants.”

Field Trip is an excellent title for this work, too, because it takes us on a trip (in all possible meanings of that word) to a world that feels strange, exotic and far from home.

The only text at all in this book is a brief but undeniably potent statement by the photographer on the last page of the book:

During a year spent in Israel, I experienced intense flashback memories from my childhood, quite unexpectedly, memories of growing up behind the Iron Curtain during the ‘normalization’ of Communist Czechoslovakia. Our partition wall prevented us from crossing over, protected us from outside influences, and also from ourselves. The familiarity of a strictly delineated territory, played out between a wall and a sea, started to connect and overlap in my mind. Tension and a sense of physical and psychological danger hung in the air — very basic human emotions that cannot be ignored.

My movements in and out of Israel resulted in a number of border checks and the inspection of my computer discs and hard drives by security agents at airports. After several brief police detentions in Israel, I began to realize that I could not reject the idea that I was under surveillance. Governments explain away these acts as ‘security measures’, but they were difficult for me to accept 20 long years after the end of the Communist regime. Somehow I found myself back in my psychic past, assessing situations with a mild sense of paranoia.

It is likely that the Israeli security police have a record of my movements under surveillance. I have been thinking that such a report would be the most fitting text for this book. But there are some things in life that we are destined to never fully comprehend, that we can’t prove or refute or avoid.

Buy this book and share it with photography lovers and people who want to know about the world today. Highly recommended. 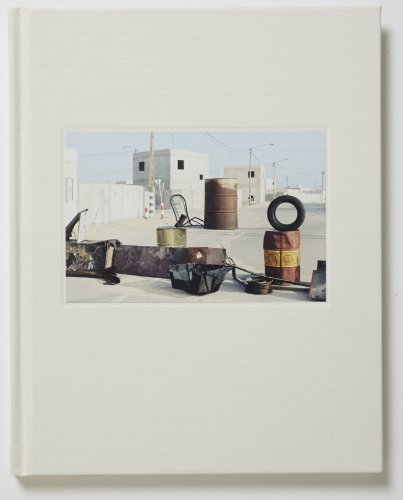