Interview
The Photographic Inspirations Behind Moonlight, 2016’s Best Picture
A conversation with Moonlight’s cinematographer reveals the surprising but formative influence that still photography had on this Oscar-winning film.

The Photographic Inspirations Behind Moonlight, 2016’s Best Picture
A conversation with Moonlight’s cinematographer reveals the surprising but formative influence that still photography had on this Oscar-winning film. 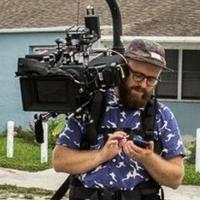 One of the founding myths in the history of cinema (and it is likely a myth) centers on the screening of a 50-second, black-and-white silent film made by the Lumière Brothers showing the arrival of a train at a station. When the film was first shown, in the 1890s, this seemingly banal scene was astonishing. The urban legend goes that the captivated audience was so shocked by the sight of a moving locomotive bearing down on them that many began to panic and flee the cinema.

According to Moonlight cinematographer James Laxton, much of today’s cinema has lost this subjective intensity. For all of the modern marvels of special effects, 3-D glasses, even shaking seats and simulated experience, what these films lack is the capacity to engage our imaginations. If the images on the screen do all the work, Laxton reasons, our brains are left with little space to roam. “All of these visual fireworks are the antithesis of why we enjoy movies: activating our imaginations and being able to feel we are somewhere else.”

By contrast, for Laxton there is one medium where the imagination is given a great deal of free rein: still photography. He says, “When I look at still images, my brain becomes actively engaged and I am able to picture a whole experience, a different world…photography enhances my sense of what happened just before or after the frame was captured.”

Indeed, over the course of a generous, hour-long phone interview, Laxton revealed the varied ways in which photography influenced the impacting (and award-winning) vision of Moonlight—

The collaborative partnership between Laxton and the film’s director, Barry Jenkins, goes way back—all the way to when they first met in college. Now, almost two decades later, Laxton and Jenkins’ shared vision has been honored with the Oscar for Best Picture and widespread recognition for the singularity of their film’s aesthetic power.

Moonlight’s visuals draw on many inspirations, from Jenkins’ own experience of growing up in Miami to the films of Wong Kar-wai and Spike Lee. But the two also harnessed the creative force of still photography to give the moving images their potency. On the side of realism, Earlie Hudnall, Jr. and his photographic visions of African-American lives had an important impact on the way the film depicted and framed its black characters. On the artistic front, the eye-popping colors and more abstract beauty of Viviane Sassen’s pictures were another major influence.

But most striking was the close relationship between Laxton’s process and the processes of many still photographers. The way in which Laxton described his work methods in preparing and shooting Moonlight brought to mind the methodologies of many photographers, an unwitting parallel that underlines the cinematographer’s link to the photographic form.

For example, the city of Miami plays an integral role in the movie. From the quality of the light that fills every frame to an all-important fusion meal in the third act, the coastal city’s unique seaside way of life works itself into the fabric of the film.

To understand its pulse and rhythm, Laxton traveled to Miami a few weeks ahead of filming. In his words, his scouting process involved, “Lots of walking around, trying to absorb the place visually and experientially—how it felt, how hot it was, the overall experience given by the spaces.” Like many long-term documentary photographers, Laxton went on, “I took the time to allow the place to seep in before putting a lens on anything. I wanted to first digest the place before putting my own stamp on it. I’m a white guy from San Francisco, and I’m traveling across the country to a new place and a new community. I felt strongly it would be a disservice to show up and start capturing images left and right without knowing anything, without reflecting on who they are. Above all else, this was important for me on a human level—to engage with my subject personally before I started to capture it.”

Once Laxton began shooting, maintaining this sense of intimacy and subjectivity was key. Unlike many films (large-budget ones, anyway) which have separate cinematographers and camera operators, James Laxton shot “98% of the film” himself. This involvement was essential for bringing the audience fully into the film’s world. “You see through the eyes of the characters—at times, they speak into the lens, as if talking to you. Since the subject and tenor of the film was so sensitive, we needed to have that intense subjectivity.”

Laxton’s close proximity with the actors also played a formative role in the way the film was shot, his process deeply rooted in his physical presence: “I was on my feet, with the actors, operating the camera and finding myself influenced by all the things that were influencing them at the same time—the heat, the energy, their emotional chord. I was present in a real space, with real people, rather than 40 feet away, watching on a monitor. As they were performing, their emotions become heightened, and by being so close to them, I could make corresponding choices: walking closer, zooming in, pulling back.”

Two examples illustrate Laxton’s description. The first is the celebrated “baptismal” scene where Chiron, the protagonist, is taught how to swim. Laxton described how the moment was a physical one for the characters—and became one for himself. By immersing himself in the water with his camera rig, both he and the camera had to fight the tides of the ocean. What the characters were going through, the camera was as well, allowing the audience to engage fully with the experience of Chiron.

In another scene, in the film’s second chapter, Chiron comes home and sees his mother in the courtyard. There’s a shot in the sequence where his mom looks at the camera and says, “I’m your mamma, ain’t I?” On paper, the shot was going to end there. In reality, the energy created at that moment was so heightened that Jenkins never called “cut.” Laxton, present in the charged atmosphere, continued to track the shot all the way to the front door. Because of how deeply involved everyone had become—thanks to their shared intimacy in the space—Laxton was able to follow the moment to its dramatic conclusion.

Another parallel to photography can be found in the decision to shoot the film digitally. Similar to still photography, an active debate still continues in the filmmaking community about the merits of shooting in analog. Each has its advantages, but according to Laxton, shooting digital was essential for Moonlight’s final result: “When you are rolling film, time is more precious. This creates a lot of pressure and intensity about what to capture in the frame. When you roll digitally, there is a bit of laxness—and in that space, you can find nuance, subtleties and moments of realism.”

“I think Moonlight might not be what it is if we had shot it on film. Working with young actors, it would have been challenging to push them to deliver perfect performances every time the film started rolling.”

A small but memorable illustration of Laxton’s theory occurred during the same swimming scene mentioned above. In the film, there is a short flash, before the drama builds, in which we see a young Chiron innocently and unconsciously playing with his hands in the water. This was not a planned moment. Alex Hibbert, the child actor, was sitting in the ocean, waiting for the proper work to begin and did what almost any kid does naturally when sitting in the water. Thankfully, Laxton’s camera was already rolling. “If we were shooting on film, I’m not sure that would have made it into the movie. We probably would have brought Alex out into the water, set him up, and called action right at the start of the shot—thus missing that moment entirely.”

A final but essential influence, based in the shared material history of photography and cinema, made itself felt during post-production. Although, as mentioned, Moonlight was not shot on film, the movie’s unique color palette was aided by digital intermediate processing at the end—specifically the use of LUTs to achieve a rich, filmic tone.

Without getting too lost in technical details, suffice to say that each of the movie’s three parts drew directly on the specific look and feel of a different film stock to help convey its message. Fujifilm tells part 1—using the stocks’ blue and green to express the brilliance of the water in Miami and the city’s lush vegetation. After all, this is what stands out to a child—the vibrancy and intensity of the surrounding world. Agfa film tells part 2: Chiron’s teenage perspective on the world is echoed in the duller, more washed-out color spectrum. Finally, Kodak was used for part 3; the film’s warmer hues emphasized and communicated the welcoming atmosphere of the diner scene [shown above] and the romantic finale.

Both photography and cinema, when done well, have the power to transport us to other worlds and offer intimate connections with people we might never engage with. In the case of Moonlight, the film works because it marries the intensity of director Barry Jenkins’ own experience growing up in the hardscrabble neighborhoods of Miami with the visual virtuosity of his long-time friend James Laxton. Their seamless artistic collaboration allows the public to immerse themselves in a worldview that has long been overlooked in any medium—poor, black and homosexual. But above and beyond any such categorizations, Moonlight operates at such an intense and personal level of subjectivity that these labels fall away. Instead, Laxton’s flowing camerawork and liquid colors pull us into a perspective we didn’t even know existed but now won’t soon forget—that of Chiron, the one and only.

Editors’ Note: Moonlight was nominated for six Oscar awards and among other prizes, was named the year’s Best Picture.

You can learn more about Viviane Sassen in this previously published feature on her work, which includes an exclusive 5-minute audio interview with the artist herself.