Book review
Dust (to Dust): Soviet Nuclear Test Sites
Through images of nuclear test sites, Kander is not interested in storytelling, in documentary, in reportage—indeed, there are no easy facts to grasp when we gaze upon these desolate vistas—his work poses the kinds of questions that have no answers.
Photographs by Nadav Kander
View Images

Dust (to Dust): Soviet Nuclear Test Sites
Through images of nuclear test sites, Kander is not interested in storytelling, in documentary, in reportage—indeed, there are no easy facts to grasp when we gaze upon these desolate vistas—his work poses the kinds of questions that have no answers.

No carrion will kill a crow. The crow is the indestructible bird who suffers everything, suffers nothing.

Crows. Crows. Crows. The first three spreads of Nadav Kander's enigmatically titled book, "Dust," show the dark silhouettes of branches against a night sky, with the black shadows of these ominous black birds somehow standing out against the darkness. Crows are drawn to death, to decay, to remains. But Kander did not travel to the borders of Russia and Kazakhstan to pick over radioactive ruins and photograph crows. In fact, Kander was not even there to photograph the ruins themselves, impressive and awe-inspiring as they are. Kander was first drawn out to these places of death and isolation to discover a secret—the secrets of destruction. But once there, the secrets, the answers, the facts all fell away. What he began to explore then was the darkness: the darkness in himself, the darkness in man.

Kurchatov/The Polygon: the world has mining towns, military towns, tourist towns. Kurchatov was an atomic town. The place was built by gulag labor, named after Igor Kurchatov, the nuclear physicist tasked with producing the atomic bomb and dedicated to 'science.'

The Polygon, meanwhile, was the primary testing venue for the USSR's nuclear weapons. The site of 400+ tests over the course of the Cold War. The surroundings steppes were falsely claimed to be uninhabited, allowing the military scientists to observe, first-hand, the short- and long-term effects of radiation on animal life (including human). Today, a small population ekes out life among the ruins. The area has the highest incidence of cancer in the world. The military facility itself was felt to be so secret and so dangerous, it had to be picked over by an international team of nuclear scientists and then bulldozed to ensure that its secrets did not get out.

Priozersk (or Moscow 10): another secret military facility. This place would not even appear on world maps until 'discovered' by Google Earth. Partially abandoned, yet still leased to the Russian military for continued research on anti-ballistic systems. In other words, the legacy of destruction continues.

Today, we might happily trot through the ruined pyramids of Mesoamerica or the petrified city of Pompeii with our children trailing behind. We might pause for a moment to consider the awful calamity that led to the abandonment of these sites but we'd just as likely throw an arm around our partner and say "Cheese!" One reason that Kander was drawn to the modern-day ruins of "Dust" was to force our discomfort a little more directly. These stunning photographs throw a "shroud of beauty" over a great, terrible thing whose implications still hang over our heads today: the advent of the atomic bomb. We look in awe and in fear. We are drawn in, yet repulsed. What information do these images actually hold? Are these photographs of the past or of the future? In 1,000 years, what will be left of us? Dust?

Kander searches for subjects which allow him to explore the fundamental tensions that surround us: no life without death, no beauty without imperfection. Through the images themselves, he is not interested in storytelling, in documentary, in reportage. There are no easy facts to grasp when we gaze upon these desolate vistas. His work poses the kinds of questions that have no answers.

More than anything though, Kander's photographs are not about intellectualizing. We remain stuck on an idea that it is only information in photographs that moves us. But when we look at a Rothko, we are not moved by the text, the captions, the subject. We are moved by the composition, the weight, the feeling. Look again at Kander's photos above. Fascinating (and terrible) as the concrete stories that these pictures hold, these details wither away in the long run. In the end, these photographs give us the chance to really see what's there and put aside the worries of the day, the year, or even the century. What will be left of us 1,000 years from now? Dust. 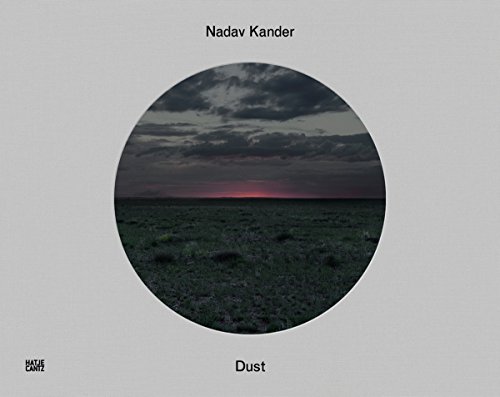 
For the electronically inclined, the book is also available as an app that can downloaded to your smartphone or tablet.