Book review
Victorian Giants
A review of a first-rate catalogue—filled with compelling stories as well as an overview of photography’s relation to painting and other arts—that accompanied a major exhibition at the National Portrait Gallery in London.

Victorian Giants
A review of a first-rate catalogue—filled with compelling stories as well as an overview of photography’s relation to painting and other arts—that accompanied a major exhibition at the National Portrait Gallery in London.

Sometimes two contradictory things can be equally true. For me, right now, I wish I was in London, but I am also glad that I am half the planet away. Here on the American prairie, I frequently find myself lingering in the nostalgia of favorite places I’ll visit again. While in London, my memory of the prairie is sharp, and on the prairie, my memory of the sweet taste of fruit bought in twilight at the Goodge Street station is visceral and pleasing. This is the odd dislocation that is often a symptom of travel.

I bring this up because I missed something good. And today, I am glad I missed it.

The National Portrait Gallery in London recently hosted an exhibition titled Victorian Giants: The Birth of Art Photography. It opened on the first of March, exactly two days after I last left town, and it closed on May 20th. I missed it completely.

I really wanted to see that exhibition. Although I am no historian, I love history, and the birth of anything—the inventiveness and creativity and determination and boldness of striking out in any new direction—has always been a good story. I know I would have wandered into the gallery, ridden up the escalator, and then spent hours admiring old photographs, reading small explanation cards, politely wondering how all of this material came to be.

To my American ear, “catalogue” means something slightly larger than a brochure. That’s not the case here. The book is 240 pages, with 190 illustrations. Phillip Prodger, former Head of Photographs at the gallery, curated the exhibit and wrote the text. It’s a compelling read.

The book is not about the invention of photography. Although it does examine early technical developments, such as the invention in 1851 of the wet-plate collodion process (a way to make negatives stick to glass), it does so always in service of its larger question—how did photography define itself as fine art?

Nicholas Cullinan, Director of the National Portrait Gallery, writes in his foreword:

“When Julia Margaret Cameron, Lewis Carroll, Clementina Hawarden and Oscar Rejlander took up photography in the 1850s and 1860s, a debate about its status was already under way. Is photography an art? And, if so, what is its relation to other art forms? These four Victorian giants championed the artistic potential of the new medium, forming a bridge between the art of the past and the art of the future. Their experiments would inspire generations of artists, and the questions they raised remain as relevant now as they were then.”

And as Prodger adds:

“The pictures they made are among the most beautiful, provocative and inviting of their time. But, more importantly, they mark the birth of an idea that we now recognize as among the greatest and most enduring of the nineteenth-century visual culture: photographic art.”

In truth, for me, there are two books in this volume. There are the images, of course. But then there is the story. Prodger is a first rate critic, yes. He is also a first rate storyteller. He moves seamlessly from narrative to aesthetics. The book follows the efforts of these four photographers to embrace, reject, and redefine photography’s relation to painting and other arts. Prodger writes:

“Their attitudes towards the traditional fine arts, especially painting, were complex and even contradictory at times. Yet each quickly recognized that photography’s unique power lay not in its ability to mimic the conventions of other, earlier, art forms but to forge new ways of visual thinking.”

There are fine stories in Victorian Giants. The four photographers knew each other, often collaborated, often shot portraits of the same people. The creation of Rejlander’s Two Ways of Life [above] is fascinating. (My lord—32 negatives, give or take!) Cameron’s effort to photograph Giuseppe Garibaldi is poignant. “…Cameron, desperate to photograph one of the most famous men alive, is said to have thrown herself at Garibaldi’s feet. Tennyson’s daughter Edith recalled that the Italian ‘thought she was a beggar when she kneeled before him, her stained hands upraised, begging to be allowed to take his picture.’ Garibaldi declined her invitation, and Cameron was heartbroken.” The book often reads like an unfolding mystery.

There is also keen thinking. For example,

“… these examples derive psychological intensity from a particular kind of incompleteness, a combination of pictorial veracity and narrative ambiguity. In their own way, each exploited photography’s unique ability to portray a subject convincingly but without overt explanation; the implicit tension present in many photographs between exactness and uncertainty. Their success hinged on an approach to storytelling that, if not entirely new with the advent of art photography, gained a fresh conceptual foothold.”

Reading Victorian Giants, I’ll admit I wasn’t paying any attention to the photographs at all. The writing—the stories and the insights—are that good. When I finished, and I turned back to page one to review the images, I was profoundly grateful for the text.

Like a great many people (I hope), I’ve looked at Victorian era photographs—nearly all of them portraits hanging in some historical society gallery—and been a bit lost. Who were these people? The stern faces aren’t exactly inviting. What was the photographer trying to say? Victorian Giants explains, at least in part, the world in which these portraits were made.

In Victorian Giants there are portraits—taken by Cameron, Carroll, Hawarden and Rejlander—of Charles Darwin, Robert Browning, Thomas Carlyle, Alfred Lord Tennyson, and a few hundred others.

As photography was attempting to accept the influence of painting while setting itself apart, it’s little wonder so many of the early shots are portraits. But the genius of this book, and the gallery exhibition that celebrates the work, is that these portraits are now in context. Here is the breathtaking new technology that allows for a whole new way of seeing. These are not only art shots—these are the first art shots! Here is where the idea begins.

Often, while looking at this book, moved by the images and text, I had an inelegant thought. “This is so cool,” I thought. On a lark, I asked some friends what a Victorian person would have said when, today, we would use the word “cool.” I did not know there was a dictionary of Victorian slang. The suggestions came fast. Interesting. Topping. Ripping. Smart. Lovely. Capital. Dashing. Deevy. Brilliant.

I suppose all of them work. But the last one is best. Victorian Giants: The Birth of Art Photography is a brilliant book. I’m glad I missed the show.

Victorian Giants will also run from the 30th of June to the 23rd of September at the Millennium Gallery in Sheffield, United Kingdom. 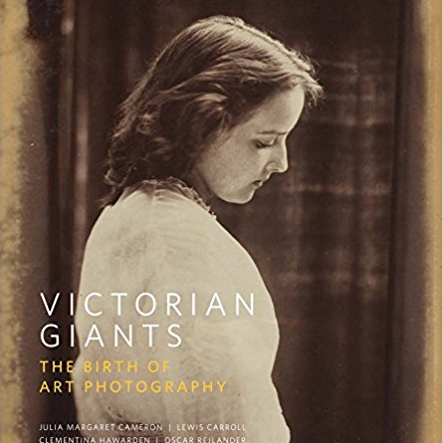