Book review
American Fair
Packed with jubilant families, the smell of sweet cotton candy, and the sounds of carnival rides, the county fair is a nostalgic cultural institution for many Americans. Here, a photobook that digs deeper into the quiet moments that visitors often overlook.

American Fair
Packed with jubilant families, the smell of sweet cotton candy, and the sounds of carnival rides, the county fair is a nostalgic cultural institution for many Americans. Here, a photobook that digs deeper into the quiet moments that visitors often overlook.

I was born in Kansas City, Missouri, USA, in 1958. I grew up in Missouri and then Illinois, in a suburb outside Chicago. And although I finished grad school in Massachusetts and began my academic career in South Carolina, I’ve lived in western Minnesota since 1987.

I know the county fair. It’s a deep ritual for me. I can’t tell you how many I’ve attended. I can’t tell you how many hot summer nights I’ve spent, as a child or later with my own children, wandering amongst the rides and games and animals as the buzz of cicadas filled the air, as thunderstorms rolled over the fairgrounds, as over-the-hill rock bands played their ancient hits.

I’ve watched, for years, the acne-faced boys try to impress the over- or under-dressed girls with their skill, the ever-present quest to score a gargantuan stuffed animal as a sign of their devotion and hope. I remember the look on my daughter’s face as she tried to convince me she had ridden the Zipper before with her friends and wouldn’t I take her on that ride again? I remember my son’s determination to get to the top of a rigged rope ladder to claim a prize. And I remember watching incredibly fragile children hold the leads of very large cows and pigs as they—the animals—were paraded into a show ring. God love the 4H Club and the Future Farmers of America. And then there were the contests—baking and photography and art and everything else—and the sea of blue ribbons. Everyone is proud at a county fair.

In my memory, the county fair is crowded, noisy—the press for cotton candy or funnel cakes an act of unwanted intimacy, the line for tickets endless, the smile on a carnie’s face both welcoming and sucker-filled. If I were to take a picture of a county fair, it would look like a Where’s Waldo page through a Tim Burton lens.

I mention all this because I have on my desk a fine new photobook called American Fair, by Pamela Littky. I know the American fair very well. Yet nearly every page of this book is a wonderful surprise. She and I have stood in the very same places, and yet I could not have imaged what she saw.

Littky says, in the little bit of text at the book’s end, that these photographs “celebrate the heartland. They celebrate diversity. They celebrate community. And by doing so, they showcase…the most unifying and nostalgic ideals of our American culture and society.”

It’s clear Littky loves the county and state fair. Yet, for her, the fair is a much quieter place than the fairs in my own history, and much emptier too. While I remember noise and crowds and simultaneous demands on every sensory input, Littky sees a fair in Dodge City, Kansas, where there are no lines at the ticket booth and no wait for the Zipper. In Cimarron, Kansas, she sees a stand for cotton candy, popcorn, sno kones and cold drinks, and there is only one small boy in line.

In Gordon, Nebraska, there’s no one in line at all for the poor schmuck running the Lion’s Club food stand. And in Ness City, Kansas, the Tilt-A-Whirl ride is closed, surrounded by overgrown weeds.

It would be easy to say the loneliness in these photographs is an indictment of the hollowness of the experience. There are no crowds. There is no noise. It would be easy to wonder if the whole enterprise wasn’t a facade for something that left town a long time ago.

But that’s not what I see at all. Instead, what I see are photographs of intimacy and love. We all know the press and rush and thrill of the rides and food and noise. Littky’s book captures the space between all that. These are the moments of peace. This book doesn’t deny the fun; instead, it celebrates the moment when a family grows quiet—not out of awkwardness but out of comfort and security.

There are photographs in this book I find myself returning to, smiling at the nostalgia, enjoying the wryness of her photographic voice. In Cimarron, Kansas, there is the Wild Thing—just a tall slide with a couple bumps under lamps at twilight—but the slide and a couple trucks and a camper are all foregrounded. Beyond them stretch vast, open and dark empty fields until the eye reaches the lights and water tower of a small town on the horizon. This photograph, to me, speaks loudly about youth and imagination. Here, at the border of town, there is a thrill. It’s a small thrill, yes. But it’s the kind of thrill we remember when we are way too old for the ride. Yes, we think, let’s light out for the territory.

It would be unfair to claim American Fair is an unpopulated book. There are pictures of carnies and what appear to be middle-school dance lines. There are kids in cowboy boots and large belt buckles. There are doe-eyed romantics and crusty seniors.

In Sedalia, Missouri, a young woman in an evening gown and high heels sits apart from others—a competition?—an ace bandage wrapped around her right knee. Her look could be weariness or dashed hope. But it’s also compelling. We want her to do well! Hay leaks from the partially open steel door behind her.

Also in Sedalia, perhaps from the same event, a woman looks out from a gathering of women dressed in formal-wear, sitting on folding chairs beyond chain-pulled overhead doors and worn concrete walls, an American flag in the corner, and God knows what she’s thinking.

I believe a single photograph can hold a narrative, can provoke us into wondering and then creating a story that either results in or follows the brief instant caught in the camera. That’s one of the strengths of this book. So many of the pictures sent me into nostalgia or thoughtfulness. For this midwestern kid, American Fair is a book about stories from home. I enjoyed every page.

The book is a mix of color and black and white. Many of the photographs are portraits. Many of them are deeply ironic. A young woman sits on a bench next to an overflowing trash can, the text on the bench reading “America’s Finest Attractions.” A man watches children on a ride, a balloon in the shape of an assault rifle in the colors of the American flag slung over his shoulder.

Yet here is a truth about irony. It only works when hope is present. With perhaps the kind of intimacy that comes from deep knowledge and love, these pictures really are admirations. I want, with every bit of my history and hope, to be at a Littky’s fairs, where the evenings are a perpetual soft twilight, the lines are short, the food is good, I see my neighbors and the rides give me a glimpse of home.

American Fair, as Littky claims in her text, celebrates the heartland—it’s a very odd festival of hope. It is a fresh and familiar book. It’s also true. 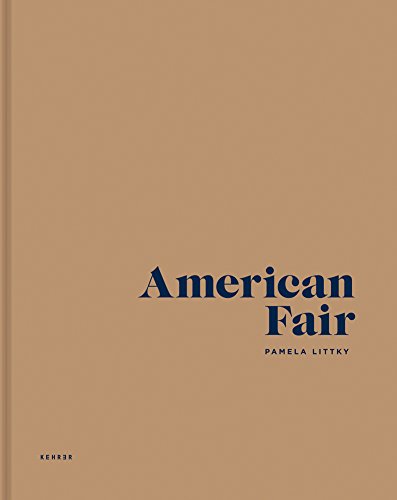