Book review
Children Facing the Future: Pieter Hugo’s “1994”
Photographs from this important new book feature children born after 1994 in Rwanda and South Africa: “young people who inherited the racial and tribal divisions that fractured their countries and left them to pick up the pieces.”

Children Facing the Future: Pieter Hugo’s “1994”
Photographs from this important new book feature children born after 1994 in Rwanda and South Africa: “young people who inherited the racial and tribal divisions that fractured their countries and left them to pick up the pieces.”

Pieter Hugo shot to fame with The Hyena & Other Men (2007), a set of photographs of the gadawan kura (hyena handlers) who traveled around Nigeria with their chained animals and earned a living with shows for the public.

His most recent publication, 1994 (Prestel, 2017), harkens back to a dramatic year in the history of South Africa: the first democratic elections and the end of a legally instituted regime of white supremacy. This held out the promise of a new epoch for South African children born in or after that year. Instead, something awful unfolded in the neighboring country of Rwanda in 1994: a genocide that killed an estimated one million citizens in one hundred days.

In his new work, Pieter Hugo has photographed children born after 1994—young people who inherited the racial and tribal divisions that fractured their countries and left them to pick up the pieces. Hugo himself grew up as a privileged white in South Africa, and now—feeling like “colonial driftwood,” as he puts it—he confronts legacies of the past in a series of al fresco portraits.

His subjects stare unforgivingly at the camera, the photographer and us, the viewers. The children are nearly all positioned in natural settings—elements of stone, water, trees and flowers form the backgrounds—but such contexts only make their still presence more disconcerting. The tacit but impossible to forget backdrop of genocide and institutionalized racism are anything but natural.

Some of the children stage their own settings, frequently with an awkwardness that is reinforced by the often donated and ill-fitting clothes they find themselves dressed in. A Rwandan girl wears a gold sequined dress against an earthy background of red-brown soil, and other children are attired in equally odd clothing. There is a shot of a white South African boy who is dressed in his everyday garments, but even here the normalcy is disturbed: he is perched on a small boulder, isolated from the land, with his hands crossed as if ready to be roped together—like a political prisoner.

There is a disturbing sense of silence in most of Hugo’s photographs which is emphasized by his subjects. Their self-possession, the sense that they know something, is what discombobulates the viewer. Their faces are not accusatory—they are not making any demands on adults—but they do not idealize innocence. They occupy and own their own spaces, forcing us to think about our own relation to this troubled but still resonant era of our shared history. 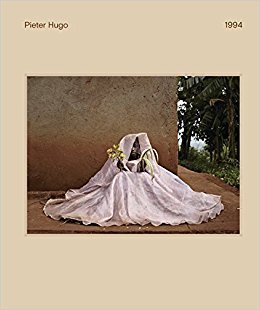 If you’re interested in seeing more work on this and similar topics, we’d recommend the following articles: Pieter Hugo’s Kin, a collection of photographs that probes South African identity and the feeling of belonging; School Portrait Rwanda, a look at the new generation of Rwandans—those who didn’t experience the genocide—and their hopes for success and peaceful lives; and Unequal Scenes, photographs shot with a drone that illuminate the striking divisions still present in the South African landscape.