Feature
The Last Book
Replaced by iPads, smartphones, earbuds and kindles—when and where will the last printed book be spotted? Photographer Reinier Gerritsen documents this endangerd species on the world’s subways.

The Last Book
Replaced by iPads, smartphones, earbuds and kindles—when and where will the last printed book be spotted? Photographer Reinier Gerritsen documents this endangerd species on the world’s subways.

A book about books. Their covers and people who read them. During my photographic survey in the subways of Beijing, Paris, London and New York, I found that in the past five years, the number of printed books has steadily dwindled while the number of e-books and tablets doubled each year. Continuing this projection to the coming years, I predict that I can photograph the last book in the spring …

The world—and the word—is in the process of becoming less and less dependent on paper. Our habits of reading, especially as they occur in the public space, are shifting each day. Photographer Reiner Gerritsen focuses on books and their readers in public buses and subways as a measure of this rapid change.

The work began for Gerritsen as a series of modest observations, and has turned into a series of unexpected, documentary portraits, set against a visual landscape of best sellers, classics, romance novels, detective thrillers, Bibles, biographies, and more. Gerritsen depicts solitary individuals engrossed in the worlds they hold in their hands, and he creates complexly layered narratives informed by the choices of readers and the the body language of fellow passengers lost in their own forms of dealing with crowded isolation. 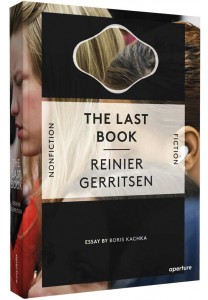