Interview
Finding Ourselves in Our Pictures
The second in a series of deeply personal interviews with some of our favorite street photographers—this one touching on identity, ethics, and the open mindset needed to make great photographs.

Finding Ourselves in Our Pictures
The second in a series of deeply personal interviews with some of our favorite street photographers—this one touching on identity, ethics, and the open mindset needed to make great photographs. 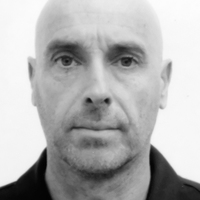 I am conducting a series of interviews titled “You Can Shoot. Can You Talk?” The set is composed of 20 unconventional yet simple questions; some of them apply purely to the art of photography, while some strive to get to a deeper emotional level. My interviewees are gifted and accomplished visual artists with a keen interest in the documentary, situational, candid, travel, and street genres.

Arek Rataj: What is your first childhood memory?

Stuart Paton: Basking in the comforting swirl of my mother’s amniotic fluid but thinking, “It’s probably all downhill from here, pal.” Then a few years later, feeling lost and lonely after being dropped off at a children’s home and realising my initial pessimism had been bang on the money.

OK, maybe that first one was just a daydream but a relic of the second lives on in my pictures.

AR: Are you still learning who you are?

SP: No, I’ve already unpicked that particular combination and now I’m busy trying to unlearn who I am because I didn’t like what it taught me. That said, it definitely is helpful having an understanding of what makes us tick in order to avoid being capsized by our mind-storms. Personally speaking, I cope much better by staying outside my head because it’s not a place I want to loiter.

AR: Who are you when no one is looking at you?

SP: I suspect this is the question that provokes the most lies from people…

That’s like, “Did the tree actually fall down if no one was there to witness it?” To a certain extent we view ourselves through the eyes of other people, so when no one is looking at me, I’m keeping an eye on myself for them.

As a kid, I was a jukebox stacked with a little playlist of adopted personas. However, as an adult, there’s a near perfect overlap between the public and private me. Probably because my default position is misanthropy allied with a highly ethical code of conduct that treats everyone with decency until I find out they are, in actual fact, a c***.

Schopenhauer said, “We’re only truly ourselves when we’re alone.” But was anyone there to actually witness that? And if there was, does that mean it wasn’t truly he who said it?

AR: What got you involved in photography in the first place?

SP: Accident, necessity and my dad. I’d ditched my apprenticeship at the local docks and set off on a six-month road trip across America with my best pal. I was 19 at the time and bowled over by what I saw. The natural beauty; the searing inequality. So I bought a little Agfa 110 in San Francisco.

After some more traveling, I returned to Scotland and splashed out on a bottom-of-the range SLR. I started shooting pictures in earnest, using my unemployment money on bus trips and cold pies. This was Britain in the mid-1980s, just a few years into Thatcher’s dystopian masterplan, so for anyone with a pulse it wasn’t exactly tough finding social subject matter.

My dad was a good club photographer and had built a tiny darkroom underneath the stairs where we had to kneel down to print. He saw promise in my early snaps and encouraged me onwards. I mulled over the alchemy and mute hieroglyphics. Then went out and shot ‘Hoi Polloi’. My apprenticeship proper.

AR: There’s a thin line between invading people’s privacy and taking their photographs. Why do ethics matter?

SP: I believe that line is breached the moment we press the shutter. But people’s right to privacy is perfectly balanced by our right to photograph. At that point I believe what tips the balance either way is the nobility (or otherwise) of our intentions, depiction and end use. A sort of moral fulcrum.

Warning: I’m about to use the “c-word” here. Ethics matter more generally because they’re a safety net against our reptilian drives and the ravages of late capitalism. Otherwise, life would be a Hobbesian cluster-fuck and you’d be feasting on my femur.

I’m name-dropping again, but Socrates said that the unexamined life is not worth living. Fair enough, but examining it is like trying to understand the plot to Inception after 8 pints and a vindaloo. If you can be happy and decent to other (decent) people, then you’re not doing badly. When, as so many people do, you have the wolf at the door, neither come so easily.

AR: What if you took images for a couple of years without receiving a positive reaction from your audience? Would you still take them?

SP: Without a shadow of a doubt. The main satisfaction is in the shutter-button endorphins and the buzz of the bullseye. That said, I’m only human, and it is nice getting genuine compliments from switched-on folks. I usually recycle them into the kinetic energy required to get me out the door when my inner child would rather stay at home in his underpants and munch toast.

In any case, you have to keep your feet on the ground, especially on the electronic honeycomb. Global, white-noise chatter has been internalised to such an extent that compliments are often empty of substance, leaving anyone resisting the matrix somewhat disorientated. The people who keep it real are scarce.

More generally, I think we have to be aware that certain visual criteria that may land you popularity can also lead you astray if you overly adapt to those criteria when they’re not genuinely your own. The perverse effect of subliminally incorporating visual click-bait into your method. Best to stay humble and hungry. Otherwise, like Icarus, you fly too close to the sunshine of popularity, the wax melts and you lose the wings that elevated you there in the first place.

AR: Do you often get jealous of someone’s achievements?

SP: Jealous, no. Envious, sometimes. Admirative, often, but not nearly as often as I’d like.

AR: If you could wake up tomorrow in the body of another artist, who would you choose and why?

SP: I think I was possibly part of the last generation for whom popular music was vitally important. My musical heroes nourished me to the core. So to return the favor, I’d wake up as a hybrid of all my favorite singers—though a fat Afro-American lady with a Scouse accent and hearing-aid might be a disconcerting stage presence. But I can’t imagine anything more magical than using the power of voice, words and melody to bond with a spellbound audience and move them to tears. The way I sometimes still am.

AR: If you could have personally witnessed a perfect street scene at the right decisive moment, what would you want to have seen?

SP: I’d avert my gaze. Because thereafter scenes would always be, at best, second best. You have to be careful what you wish for. I prefer pictures that are slightly dirty behind the ears. It can really undermine your photography if you go out primed with preconceived templates of what you’re pursuing. It’s lazy clutter that will limit what you see by filtering out more interesting opportunities. Better to be child-like. A raw receptor. Open and tingling with the tangential.

AR: What do you want your tombstone to say?

SP: The pessimism I mentioned at the start will no doubt be a companion until the bitter end. Subsequently, I don’t predict much outpouring of grief at the sparsely attended send-off, so allow me to indulge myself. One last time.

Just my name. Finally up in lights. A bulb on the blink as a fitting metaphor for my flawed existence. Swallows circling overhead in tribute as a colliery brass band comes accidentally into earshot. The gravestone flanked by two 1970’s go-go dancers carburating on amphetamines. The jaw-dropping centre-piece, a brief but continuously looping hologram extravaganza of my life’s highlights culled directly from the angry, jealous cerebral cortex of God himself.

Surveying it all through a celestial glory hole like a bemused Bruno Ganz will be my fallen, angelic echo. Finally finding peace. Finally sparing you all these tiresome wisecracks. And consoling myself with the thought that whatever my failings, I at least exposed myself to the storm rather than just dropping a button into the plate.

Editors’ note: You can see more of Stuart Paton’s work on his LensCulture profile or on his personal website.

We will be running a small selection of Arek Rataj’s interviews over the coming months, focusing on some of our favorite contemporary street photographers. Note that this is an edited version of Rataj’s exchange with Paton. You can find the full transcript and much more information about this project on Rataj’s personal website.

The first conversation in this series was with Dimitri Mellos.