Feature
Storing Memories: Contemporary Japanese Daguerreotypes
Over a decade ago, Takashi Arai decided he wanted to work chronologically through the historical techniques of analog photography. To this day, he remains stuck on the daguerreotype. Learn more about this contemporary master of the timeless method.

Storing Memories: Contemporary Japanese Daguerreotypes
Over a decade ago, Takashi Arai decided he wanted to work chronologically through the historical techniques of analog photography. To this day, he remains stuck on the daguerreotype. Learn more about this contemporary master of the timeless method.

When he first began learning about daguerreotypes, Japanese photographer Takashi Arai thought it would only be a phase. He had intended to learn about them and then move on, chronologically, through the history of the medium: calotypes, tintypes, dry plates, Kodak all the way until the contemporary moment. After all, his very interest in photography had been an accident in the first place, “I was initially interested in the history of cinema. I began by studying the Lumière brothers. I then became interested in the origins of photographic processes. After visiting an exhibition at the Musee D’Orsay, I stumbled across the daguerreotype.”

Arai, intrigued by the roots of photography, decided to explore the antiquated process further. While some people might have been satisfied with scanning a Wikipedia page, Arai decided to take his interest deeper: his investigation lasted 10 years—and continues today.

Beginning in 2002, Arai taught himself everything he could about daguerreotypes. He found the original manuals (translated from French into English and then Japanese) written by Louis Daguerre. Fascinated by the concepts, he began to assemble all the materials necessary to produce actual plates himself.

Unfortunately, the process described in the original manual didn’t seem to work at all. Undeterred, Arai began writing letters to other members of the daguerreotype community. As with many tight-knit groups of passionate individuals, each person proved incredibly generous with their time and knowledge. Arai slowly improved his techniques, improvising with contemporary modifications when necessary.

But despite some small adjustments, Arai remains committed to the roots of the medium. For example, the lens that he shoots with is an authentic 19th-century German model. He found it on eBay, on sale for 400 euros. While the lens—in truly excellent condition—could easily be displayed in a museum, Arai feels justified in using it for its original purpose.

Similarly, Arai hand-makes his silver plates. To be precise, the plates themselves come from a factory, but Arai fastidiously and personally polishes each one until it looks just right. Ever attentive to detail, a single, small plate takes a good hour to produce. But all of this is part of Arai’s artistic routine.

Indeed, the reflective polish of the daguerreotype plate is essential to its magic. Affectionately dubbed, “the magic mirror,” a well-made plate has the unique quality of implicating the viewer in the frame. When standing in front of Arai’s work, one’s face becomes visible on the reflective surface of the image. This mirroring makes the viewer feel completely involved within the worlds depicted. 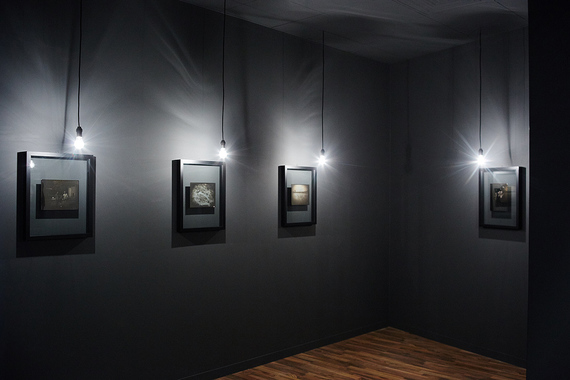 Another form of involvement can be felt in each plate’s subtle imperfections. From the highly variable exposure times (several seconds to 15 minutes) to the physical markings on the plates themselves, each image stands as a hand-crafted, singular work of art.

This feeling of materiality has other consequences. For example, when viewers first saw Arai’s series of daguerreotypes made around Fukushima, they began to invent reasons for the imperfections visible on the plate. Surely, they said, it was radiation that gave his plates their unearthly blue glow. Perhaps, they thought, it was the fallout that was leaving such tactile traces behind?

According to Arai, nothing could be further from the truth. The physical imperfections are a consequence of Arai’s commitment to making things by hand. And the blue glow is an incidental chemical reaction, common to daguerreotype plates the world over. But these viewer projections are no accident: they speak to the way in which these ghostly silver plates invite us to become enmeshed in the worlds that they depict.

While Arai has adopted one of the world’s first photographic methods and made it firmly his own, there is one element in his practice that would surely drive the original 19th century practitioners crazy. When pressed about the origin of the blue glow that suffuses many of his plates, Arai said this was an example of solarization. While many analogue film processes face this problem, it is unique to daguerreotypes that the result is a distinctive, deep blue tone.

But what’s special about Arai’s work is his foregrounding of the effect. With a self-deprecating smile, he admitted, “19th century daguerreotypes rarely have blue because it was considered to be a basic failure, only acceptable for beginners. But for some reason, I always liked it and so I began to include it intentionally in the work.”

The purists, then, can be forgiven. Arai is no beginner—indeed, he is pushing a very old medium into bold new directions.

Editors’ Note: We discovered Takashi Arai’s work as part of the inaugural Dubai Photo Exhibition. Read our interview with the talented Japanese curator, Mariko Takeuchi, who brought Arai’s work together with 6 other Japanese photographers.

Takashi Arai was the recipient of the 2016 Kumura Ihei Award—a prestigious annual award given out to Japanese emerging talents. We look forward to following Arai’s work, regardless of the medium, in the years to come.