Collectives Spotlight #7: The Analogue Street Collective
A diverse and eclectic group of photographers united by their desire to capture the soul of city streets—using (mostly) the irreplaceable medium of traditional film photography. 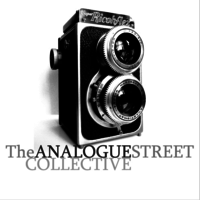 In the world of photography, the idea of collectives is not new: Magnum Photos set the standard nearly 70 years ago and countless other efforts have cropped up in the intervening decades. But what is new, or at least has changed dramatically in the past decade, is the ease and speed at which groups can form and collaborate. Combine this fact with street photographers’ wide-ranging embrace of social media, and we are witnessing an explosion of collectives that bring together like-minded street shooters from around the world and then rapidly disseminate their work across digital networks.

Week by week, over the course of the LensCulture Street Photography Awards 2016, we have featured inspiring street photography collectives from across the globe. For this final spotlight, we look at the proud and passionate group, the “Analogue Street Collective.”

LC: What were the origins of your collective—what first brought you together, what’s kept you together as time has gone on?

ASC: The Analogue Street Collective project was initiated and launched in 2014 by Lara Kantardjian. It was based on an idea by Michael Gehling & Frieder Zimmermann who founded “The Analogue Street” as a Facebook community page.

The idea was to bring together photographers with whom we felt reciprocal respect and a common purpose. We wanted to create a group of photographers with very strong portfolios, whose work could stand alone (rather than “needing” the collective to gain recognition) but who were united in their dedication to street photography. Most importantly, we all shared a passion and appreciation for film photography and hoped to push each other to be published in both digital and print formats.

So, what connects us? Although we have diverse styles and see the world with our own individual eyes, the Collective has a shared vision, mood and sensibility. We seek to capture the everyday life and soul of the city streets and urban environments around us, with images that speak to the heart.

Despite our name, we are not fanatical purists. Some of us, on occasion, use pixels alongside our passion for film. Although we embrace the beauty of analog, we also believe that art should not be bound by overly strict limitations or rules.

Besides focusing on the group itself, we have established an open place to recognize and expose the work of other like-minded photographers. Alongside publishing our 9 members’ work, we are committed to discovering other photographers who have an artistic eye and whose images tell a compelling story. We present their work through photo series, interviews and articles dedicated to the art of film photography.

In all of our collective endeavors, we feel a great sense of mutual trust, respect and understanding. Trust in each of the members’ contributions. Respect and understanding for one another’s work, including the time and space needed to travel, work on our photography, develop and remove all those scratches from the endless rolls of film…Since the beginning, we’ve found that fewer communiqués with each other and more shutter clicks is the way in which we work best together.

LC: What attracts you, collectively, to film and analog processes? You said you’re not purists, but there’s still something distinct about calling yourselves an “analogue collective” in 2016…

ASC: The death of traditional film has been debated since the dawn of the digital age. For those who made the full transition to digital, film photography may be considered dead or well on the road to the grave—but for those of us still using film, we regard it as core to our creativity.

There is something special about working with analogue photography: from the physical aspect of the film negative (down to the inherent grain) to the beauty of the alchemy between light and photo-sensitive materials. And, not to mention, the element of surprise and unpredictability that comes with every roll…

Analogue photography, by its nature, is a slow process. The limitation of exposures on a roll of film makes you work in a different manner. Each shot feels more considered and thus, each image is taken more selectively. You can’t just fill up a memory card and make your selections later nor can you view the pictures immediately after taking them. There is a huge investment of time: develop the negatives, scan and remove the marks and scratches…

Film is not better or worse than digital, it’s just a choice (one that requires a certain dedication). Some of us simply haven’t fallen in love with an SD card as we did with a roll of film. Others are somewhere in transition between the two methods. Regardless, by continuing with traditional film processes, we hope our passion provides testament to how analogue photography remains very much alive.

LC: Collectives seem to be an important structure for street photographers, in particular. Why do you think that’s the case?

ASC: Collectives are one of the best ways to build up a body of work while sharing the ideas and energy of creativity. A good group should begin organically, followed by community-building. That is how we achieved a high level of collaboration between such like-minded people. The best groups are built from passion and kinship—this is the foundation for strong and equal relationships, where experience is pooled and remarkable creativity results.

Looking at the last two years, we have accomplished so much which could not have been possible for each of us alone. One of our greatest successes, and biggest challenges, is to keep the momentum of the project going.

LC: Finally, if a new group were interested in starting a collective, what advice would you have for them?

ASC: Set clear short- and long-term goals of what you want to achieve. Maintain a clear purpose for the collective. Never underestimate the amount of time, responsibility and dedication it takes to contribute as a member. There will be challenges along the way but confidence, passion and belief are powerful tools. Like any relationship, the more you put in, the more you get out. And also, the more energy you invest in building a strong foundation, the likelier that connection will be to stand the test of time.

Editors’ Note: You can find more of the Analogue Street Collective’s work on their website—9 photographers’ galleries as well as a magazine, a book, and a wide range of other featured photographers. In short, a great place to (re)discover your passion for film photography!