Interview
​Intimate Prisoners: A Call for Empathy in Photojournalism
Raw, real and ten years in the making—a photojournalist who spent a decade “on the inside,” shares his intimate experiences of making photographs in 74 prisons across Latin America.
Photographs by and interview with Valerio Bispuri
View Images

​Intimate Prisoners: A Call for Empathy in Photojournalism
Raw, real and ten years in the making—a photojournalist who spent a decade &#8220;on the inside,&#8221; shares his intimate experiences of making photographs in 74 prisons across Latin America. 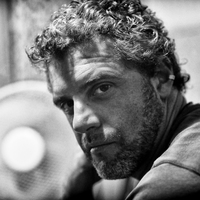 Impressed by his ambitious project, contributing writer Vera Carothers decided to learn more. First, she reviewed the recently published book, “Encerrados.” Afterwards, she reached out to Bispuri to continue their dialogue. In the interview below, conducted in Paris, Bispuri shares his philosophy on the role of empathy in good photography as well as surprising stories from his time “inside.” The text below was translated from French and Spanish.


LC: What sparked your initial interest in prisons? And how did you go about beginning a project like this?

VB: I had to present my project to each Latin American government to get access into their prisons. I told them that the goal of my project was not to judge or condemn the prison system but rather to do research, in an anthropological way. The most important thing for me was to show the reality of the prisoners, what happens daily in prisons, the quotidian details. For me, that is the work that is important. Prisons are mirrors that reflect the reality of a country. What happens in prison shows what is happening in the country.

LC: Before starting your project had you visited other prisons, in Italy, for example?

VB: No. I had never thought of doing a project in prisons. I knew that I loved Latin America very much. I went down to Ecuador and I was at a dinner and a writer was there who had written about the prison system in Ecuador. She told me if I wanted to visit the prisons, she could get me in. I took her up on it, but when I went, I was completely unprepared.

LC: Unprepared in what way?

VB: I had never been in prison and I didn’t know how to talk to prisoners, I took a few photos but I knew nothing about the history of prisons. Usually before I do a project, I read a lot about the topic. That first time I went, the prisoners threw bags of urine on me. At first I was totally surprised. But then I realized that they were reacting to someone who was totally ignorant and uninformed, without a set project or plan. The experience was so strong for me that I asked the same writer if I could visit other prisons. And so the project continued…

LC: Were you using film or a digital camera?

VB: It was a Leica film camera, an M6. When I started the project there was no digital and then after I continued with Leica. Now, I’m sure that you are going to ask me the question that everyone asks me: why did I choose to shoot black and white? I decided to take photos in black and white because in the prisons, everything is black and white; there are no colors.

LC: Your project is a mix of anthropology and journalism; how does it fit into the world of photojournalism, especially considering that it is such a long-term project?

VB: I think that photojournalism has changed a lot—it has become very fast and very aesthetic and people don’t take the time to work in-depth anymore. I have many students in Argentina and Italy and I tell them all that in order to do something meaningful today, you need to do something that takes a lot of time. Profundity allows intimacy: a physical intimacy and an interior intimacy with the subjects. I try to put myself in the shoes of my subjects, of the prisoners—to eat with them, to do everything that they do. In the prisons, I went into the bathroom to shoot pictures. I talked to the prisoners a lot, that’s very important. I was very interested in each story they told me. I would ask a lot of questions about their personal lives, as if we were friends.

I always say that taking a good photograph for photojournalism is only 30% being a photographer. You need to have a very strong sense of empathy in order to communicate at the same time with prisoners, guards, and officials. Being able to communicate and convince is a huge part of it.

LC: Was your approach well received by the prisoners?

VB: Yes, for the majority of the ten years, very good things happened. One time, for example, I was in a prison in Mendoza with a ward called Pavillon 5. The ward was closed and I could see through the bars the prisoners telling me, “Come in, come in, we want to show you our lives.” The guard told me “No, this is a very dangerous section of the prison, you can’t go in.” I went to the director of the prison and asked to go in and I was so insistent that finally he said, “You are so stubborn, you can go in by yourself—I’m not going to give you a guard.”

I was really scared—imagine, the guards tell you that you are about to go into an area of 90 of the most dangerous prisoners. But then, I went into the bathroom, washed my face and told myself, “Okay Valerio, let’s go.” I spoke to the prisoners and explained that if they could help me, maybe we could help change these conditions. I didn’t promise any change, I just wanted to show the reality. I think they took it as a challenge to the guard’s authority because I entered alone. I spent two hours with these guys and they were great. Four years later, I did an exhibition of the work in Buenos Aires and thanks to the exposure, the government closed this ward of the prison.

LC: You also went into women’s prisons. What was that like? We see some very interesting images, such as a woman dancing flamenco in the cell.

VB: It was important for me that the book had photos such as this one, photos of everyday moments. Of course, there were photos that were very intense as well, but I wanted to have a balance with photographs that were lighter. The main problem for the women in these prisons is sexuality. Women do not have the right to conjugal visits, in all the countries. Now this has changed—I asked and they told me that there are a lot of countries that have changed. At the time, though, sexuality was a big problem. Imagine that all of these women, young women, see a man come into the prison. Their desire is very intense, a lot of women came up to me and asked me, “Please can we go to the bathroom? I want to touch you.”

But the women can be very violent, as well, with each other. The same as the men—in fact, all humans deprived of liberty react similarly. Imagine that you cannot get out of this enclosed space with people that you do not know. Each person copes differently, but normally there are four stages they go through: At first, it is rage: they scream “Let me out! I can’t take it anymore!” Then they get depressed, after realizing that they can’t do anything about their condition. Thirdly, they start to get used to it. Finally, some of them are able to find a little bit of pleasure in their (reduced) life.

LC: Was access a big problem? Were there things that were forbidden or that you couldn’t see?

VB: At the beginning, they would say so, but then I would always get around the restrictions. Every time I went into a prison, I would do a general presentation and explain the project to all the prisoners. If anyone didn’t want me take his or her photo, I didn’t take it. The majority of the people accepted my explanation that I wanted to show the reality of prisons and were willing to help. A lot of the photos show a great intimacy. The men would be peeing and brushing their teeth and washing their bodies while I am standing three feet from them, photographing. They weren’t even looking at me; it didn’t bother them.

That is the magic of the photography—when you can be that close and nobody looks at you. It is as though you are invisible. Although I should say there was no magic. It all happened just through talking. Many people told me that this is one of the big achievements of the book, that I was able to get this close. Not very many people who go into the prisons do this.

LC: Does your work have a larger goal of social change?

VB: No, my goal is not to change things; I am not God. All I want is to show the way things are, in a way that touches people, that makes them sensitive to it. And then, if it does manage to change things, it is a very good thing.

LC: This project has received a lot of media attention—newspapers, festivals, television. Is there a central message you want to share with people?

VB: The only chance you have of changing things through photography is to work in profundity, to go deep into a situation and to show it. It’s the same in life as well—in a society that is obsessed with the superficial, let’s go in-depth. You can’t share something that you don’t fully know or that you haven’t experienced intimately. This is the basis of my work.


Vera Carothers is a freelance writer and educator based in Paris, France. Her work has been published in plain china, Prospect, and on her blog The Blue Hour (veracarothers.wordpress.com).