Book review
A Hard Beauty: A Review of Lynsey Addario’s “Of Love & War”
In her new book, Lynsey Addario grapples with the ethical complexities that come with being a documentary photographer.

A Hard Beauty: A Review of Lynsey Addario’s “Of Love & War”
In her new book, Lynsey Addario grapples with the ethical complexities that come with being a documentary photographer.

When old age shall this generation waste,
Thou shalt remain, in midst of other woe
Than ours, a friend to man, to whom thou say’st,
“Beauty is truth, truth beauty,—that is all
Ye know on earth, and all ye need to know.”

I would like to tell you that Lynsey Addario’s new book of photographs, Of Love & War, is a beautiful book. But, of course, it is not. At least not in the normal way we use the word. Addario is a conflict photographer. Her subjects are war and grief. And so there is death in this book. Death and violence and despair on nearly every page. Blood on the floor. Wounds that will not heal. Lives taken early.

So how does anyone describe such a book? Compelling? Yes. Disturbing? Yes again. Moving? Obviously. Yet none of these terms get to the real strength of the book. So let me go back to the original term.

Of Love & War is a beautiful book—beautiful because it is true. Gut-true. Think Tim O’Brien and his classic war story: “How to Tell a True War Story.” He writes, “True war stories do not generalize. They do not indulge in abstraction or analysis.For example: War is hell. As a moral declaration the old truism seems perfectly true, and yet because it abstracts, because it generalizes, I can’t believe it with my stomach. Nothing turns inside. It comes down to gut instinct. A true war story, if truly told, makes the stomach believe.”

Photography cannot generalize. It is always a specific moment, always the very-right-now, replete with details and nuance. And while photography certainly has its own universe of clichés and limited visions, its strength comes from specificity and exactness. In this regard, Of Love & War is overflowing.

Of Love & War is a large book—coffee table size (a term I have come to dislike as it seems to make books mere curios next to a latte or wine)—which is wonderful in that every image gets enough size to make an impact. They demand and reward study. I found myself lingering over the shocked hollowness in some stares, in the way people walk by dead soldiers in the street or desert, in the looks on every face of raft-borne refugees.

Addario’s work is not portraiture. Instead, she photographs situations. There is narrative and drama in every shot. And there is a wonderful complexity to the work. Start with the very first image: the cover. It’s a cropped version of an image that appears later in the book. The caption reads, “Soldiers with Sudanese People’s Liberation Army sit by their truck, waiting for it to be repaired, as a sandstorm approaches in Darfur, Sudan, August 2004.” Look at that face. Look at the crossed arms, hands on shoulders. Look at the sand on the arms and in the turban. Look at the rising sand in the background.Look at the closed eyes. Is that resignation? Peace? Weariness? Determination?

Of course, because that expression could be any of these things, it is all of these things. That’s the richness of Addario’s work. The best of what she captures rises to the level of metaphor.

This may be a problem, though. My friend Mike Vosburg, photo editor at my hometown newspaper, makes an interesting distinction. “Art photography,” he says, “provides questions. Photojournalism provides answers.” The answers, however, may be far from simple or direct. Addario’s work provides answers that provoke a thousand new questions. She provides documentary evidence of complex, emotion-fraught situations.

For example, look at the photograph of a secret school for girls in Afghanistan. A huddled group of students. The posters on the walls. The teacher up front. So much of it seems normal. But look again. Many of the students—all young girls—look furtively over their shoulders, afraid it seems they will be discovered. The teacher holds an infant. The image is simultaneously a typical classroom as well as Madonna and child in front of disciples. There are the lingering feelings of necessity and threat.

There is a type of arc to the book. The gentlest pictures appear first: a man walking through a rich green forest; children playing on a dead tree; Iraqis watching a 3-D movie; a mother with two children. But the gentleness is a façade. The tree, in Kenya, is dead due to drought. The children are the result of rape. Love and war, indeed. The book moves generally from the Middle East to Africa, following Addario’s various assignments, with a growing focus on women’s issues in conflict zones.

Of Love & War begins with a copy of a hand-written letter from Addario to someone else (the book does not say who), dated 17 March, 2000. She writes, “There are very few times in my life when I actually want to be on the other side of the camera, but today, as I walked through the trenches of the Indian Army side of the L o C (Line of Control) between India and Pakistan, with a bullet-proof vest and helmet, I thought to myself that I ought to be able to rekindle the moment in years to come. I have finally embraced war photography.” This is good news for us. Addario has won the Pulitzer Prize and a MacArthur genius grant for her work. More importantly, she has worked to make us all more aware. Her hope is that awareness will provoke action. Occasionally Addario includes images of contact sheets, which give us an insight to her process, to her work outside the selected best.

Mixed throughout the book are letters, journal entries, small essays by others, which give the book a deeper voice. In an early entry, Addario says, “Over time, writing letters, and then emails, and eventually journals, would be the way I processed the terrible things I’d witness in places like Iraq and Darfur…The writings record what it’s like to experience something for the first time—the first time I walked in a trench; the first time I heard a bullet…” Documentary photography is always about something happening for the first time, the only time. Addario’s personal story, her engagement and commitment to the people she photographs, gives the book a gravitas that lingers between the images and well after the book is closed.

Like a great many other people, I read and admired (and reviewed here in LensCulture) Addario’s previous book: It’s What I Do. A number of images that were included in that book are included again in Of Love & War. It’s nice to see them again in a larger context. What It’s What I Do described, and what Of Love & War illuminates, is Addario’s deep respect and love for the people she photographs. It would be wrong to say either book is about her, even though It’s What I Do is a memoir. Instead, both books are about her way of seeing. About how photography can be the way she uses her sense of compassion. Her way of love.

The truths are contradictory. It can be argued, for instance, that war is grotesque. But in truth war is also beauty. For all its horror, you can’t help but gape at the awful majesty of combat…It’s not pretty, exactly. It’s astonishing. It fills the eye. It commands you. You hate it, yes. But your eyes do not.”

—Tim O’Brien, “How to Tell a True War Story” 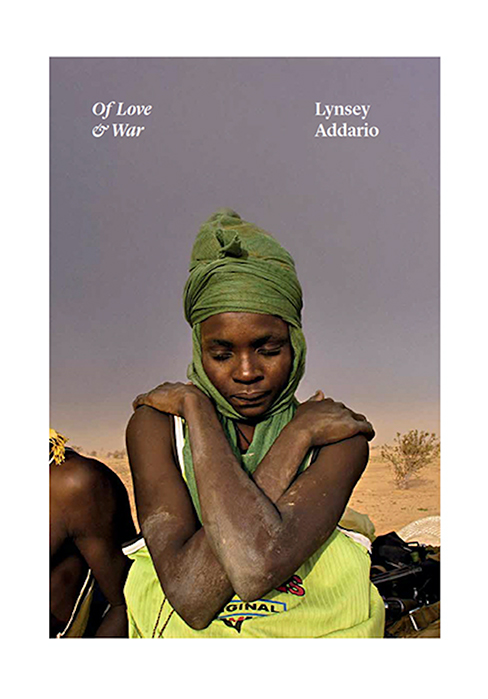