Interview
Nantar: Photography Into Dreams
How can the sound of a rising hummingbird be photographed? A meditation on photography’s ability to express visions from deep in our psyches, even to capture the invisible…

Nantar: Photography Into Dreams
How can the sound of a rising hummingbird be photographed? A meditation on photography’s ability to express visions from deep in our psyches, even to capture the invisible… 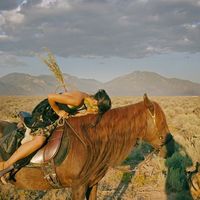 LC: You were born in New York, raised in Ecuador and then returned to the United States. I imagine this offers you a sort of outside-looking-in feeling when traversing different contexts? Does this seem accurate to your experience—that you photograph from a remove? Or, to paraphrase Robert Capa, is close proximity essential to great photography?

KMR: As photographers, we have the unique ability to stand in both places at different times: we are both near and far, observer and participant. When I am looking at something from a distance, I have a wider scope, so I can see what’s happening all around. But whatever I look at will also always be personal to me, because I find myself moved by the moment, people, scenery. It is this personal feeling that gives the work intimacy and proximity.

Put differently: great photography has the power to stop me in my tracks, but the way an image achieves that effect is non-formulaic. So it is more a matter of being attentive to what is happening (and not happening) around me and responding to that energy.

LC: In 2007, you pursued post-graduate studies at a school of journalism. Today you are interested in photographing dreams, desires and things like “the sound of a rising hummingbird.” How do you trace the development in your interests from a vision so based in documentary to a practice so driven by the non-visible? What were some key moments in this (ongoing) arc?

KMR: How I got into that Danish journalism school is still a mystery—and a great gift to me! I didn’t study photography in school; as a matter of fact, I was a painter and (for a moment) a performance artist. When I arrived in Ecuador, I started learning about the camera, and a few months later, I began working at a local newspaper.

I was awarded a grant to study in Denmark based on the work I was doing for the newspaper, and after finishing my studies and developing numerous journalistic projects, I went to the jungle. Specifically, I traveled to a place that borders Brazil, Colombia and Peru. It was here, after months of documentation, that I realized I should be revising my own life before going out and taking pictures of other people and their situation. I thought that if I had clarity about who I am, then I would be able to make more compelling and honest work. Photography brought me to a place of self-reflection, and that is how all the projects that came after started.

LC: You are very inspired by surrealism. But today, even 100 years later, we still argue about photography’s duty to show “the Truth.” What is your perspective on this stubborn debate?

KMR: “Truth” has so many connotations and significances that are dependent on so many factors. My truth is unique to me, just like yours is unique to you. In the middle, we could have a conversation that allows both truths to be equally heard and considered…

For me, surrealism started thousands of years ago, when the first storytellers decided to make animals talk, gave them two heads, and created worlds that are filled with fantastical beings. Similarly, those storytellers shared their dreams and created complex rituals to identify their significance. I consider all of this surrealism.

In the Western world, the closest we have come to this realization was in the early 20th century, thanks to the Surrealist movement. So the “truth” that I am interested in is one that cannot be pinned down; rather, it alludes to different things and gives each viewer the space to create their own significance and stories.

LC: Among many other places, you draw great inspiration from your dreams. Can you offer us one example of how a dream led to your making new work? It sounds lovely, and I’m curious to hear how it has worked in practice!

KMR: Almost all my previous projects have a component that comes from one of my dreams. Perhaps the whole project isn’t based on a dream, but they definitely draw on visual or emotional elements that I see in my dreams.

When I work on a project, I often “incubate” it: I let it sit for a while, sometimes for months or even years. Since the project is somewhere in my psyche—but not in my everyday mind—it is there and developing while not immediately present. This allows new ideas to emerge later; sometimes I see them in a dream, or they will appear in my mind as I wake up in the morning. Currently I am making a project that is directly based on dreams, and I am still developing it. I am hoping to share some of it soon.

LC: I was moved by your series “Nantar/Arutam” and, in particular, your effort in it to photograph with subtlety, emotion and abstraction. Can you say more about the project’s development? The way in which it synthesizes diverse inputs ranging from Heidegger to your travel experiences and personal philosophy is something a lot of photographers could learn from!

KMR: In the early 2000s, when I was still a student, I would edit videos for artists to earn money. I did not formally study any editing software—I simply learned it by understanding that each language has a basic structure, and once you pay attention to that structure, the language becomes more approachable.

I am sharing this story because it is all about symbolic language: we all have a rich inner world, and we approach reality with the symbols that we have gathered throughout our lives. When you witness a way of seeing that is seemingly different from yours, and you do not try to question it or explain it, you come to see the subtleties of how it works and how (at its fundamental level) it is similar to other strings of thought.

This is how I related Heidegger’s meditative thinking or Jung’s analytic aspects of the mind to my observations as I developed my project “Nantar/Arutam.” Though the project is about the Shuar people of the Amazon, I found common ground between these seemingly disparate subjects.

LC: You enjoy working across mediums. How do you balance pushing at the boundaries of photography itself while bringing in other inputs? I think there is a fear, at times, that cross-media work touches on many subjects without focusing enough on one.

KMR: I have always seen art and photography in two ways: on one end, art is a medium for the expression of the soul, self, thoughts, anima, however you would like to see it. On the other end, it has the power to absolutely and irrevocably change a person’s life.

Neither of those are light statements. Which means that it is not for me to question how a particular photographer chooses to tackle a subject. In the end, all manners and genres of work come from the same person, which means there will always be something that connects the cross-media approach. I am more interested in the intensity of their vision and message than worrying about formal or technical details.

If you enjoyed this article, you might like one of these previous features: Fairy Tale from Russia, cinematic, illusory shots of Russia—none of which are staged; A Raven’s Dream, eerie images that could have been plucked from a hallucination; and Between Grief and Nothing, a project that draws on local mythology to depict the Nepal earthquake in a sequence of dream-like photographs.