Book review
Combing for Ice and Jade
In his “love note” to his nanny, Kurt Tong weaves together personal and public histories to tell the story of Mak Ngan Yuk, one of the last of the self-combed women of China—a community of autonomous, unmarried women who rejected the customs of the era.

Combing for Ice and Jade
In his “love note” to his nanny, Kurt Tong weaves together personal and public histories to tell the story of Mak Ngan Yuk, one of the last of the self-combed women of China—a community of autonomous, unmarried women who rejected the customs of the era.

In many ways, Kurt Tong’s Combing for Ice and Jade, published by Jiazazhi Press, acts like a family album. Albeit an unusual one. It’s a puzzling object that poses questions to us as we look through it. It asks us to think about what an album is, and also, what a family is. It traces the life of a woman who doesn’t belong to one family, in any conventional sense—a woman whose resolute choices in life have forged her own relationship to those around her. It’s an album that builds on both absence and presence, beginning with a blurry photograph and framed around a limited collection of images salvaged from the albums of others. There’s more: this quiet story of one woman’s life unfolds against the backdrop of a collective history, her personal memories interjected by hundreds of other women—anonymous faces gazing up from the pages of magazines.

And yet, without photographing her once, artist Kurt Tong conjures a very clear and strong image of the woman that accompanied him through childhood as his nanny. It is his “love note,” written over the course of seven years, to Mak Ngan Yuk, one of the last remaining ‘self combed’ women left in China. Though Mak was an important figure in Tong’s life, it wasn’t until she recently became sick that he realized how little he knew of her background, outside of the frame of his family’s life. As a child, he knew she was a ‘self-combed’ woman in the way that other children did—with recognition but little understanding. But the work to fully comprehend her life was undertaken as an adult photographer-cum-detective.

The decision to become self-combed was an act of autonomy and self-determination in China; an escape from forced marriage and the enslavement of family life. During the Qin Dynasty, the booming silk trade in South China brought women into the employment market, allowing them to become financially independent. Many would wear their hair in long braids as a symbol of independence. When the market dwindled towards the end of the 19th century, the ‘comb up’ ritual was initiated as an alternative mode of life: a way to retain autonomy and avoid marriage.

“In traditional Chinese marriage, on the eve of the wedding night, the mother would have a ceremony where they comb the daughter’s hair. Each comb represents a different element: longevity of your marriage, children, etc.,” explains Tong. “Self combing refers to the idea that women who didn’t want to get married could comb themselves.” Partaking in their own kind of ceremony, comb up women would bathe in mulberry leaves, and then a fellow sister would plait their hair. A uniform of a simple light colour tunic, dark trousers and a long braid distinguished self-combed women from the wider community.

Following a vow of chastity, self-combed women would renounce all obligations towards their family and were free to travel and work. This freedom came at a price. In return, their family bore no responsibility for them, and many sisterhood homes were founded in order to provide a support system for the community during old age. Cut off from their own families, many found themselves in the lives of other families when the silk trade declined, travelling across South East Asia to take on the role of nannies and domestic helpers. This is how Mak ended up becoming part of the Tong family for almost 40 years.

Tracing journeys—with all their cryptic criss-crosses, ebbs and flows and minor interludes—is an important part of Tong’s photographic work. Originally trained as a nurse, he started his life as a photographer in photojournalism, but quickly became uncomfortable with the rapid pace of the craft. It was during his MA in Documentary Photography that he found his groove by turning inwards and embarking on slow-burning, epic personal expeditions into his own family history. “I realized I don’t really know much about being Chinese, having grown up in England. That’s when it all started,” Tong elaborates. “My project The Queen, The Chairman, and I was a longterm research project about finding out who my ancestors were, why they left China, why they left Hong Kong, and why it was that I ended up in England.”

In the sprawling The Queen, The Chairman, and I, Mak makes a brief appearance before becoming the protagonist of Tong’s next project. But how to build a portrait out of a handful of passport photos? The artist began by looking for all the photographs that existed of her. As in his previous work, where the form itself doesn’t shy away from the experience of collecting and his own shifting relationship to the material, Combing for Ice and Jade maps a complex web of information across private and public histories that are dug up around the enigmatic Mak. “I guess I’m almost making a film, but in photographic paper form,” says Tong.

We first meet Mak in the background of Tong’s own family snapshots: an arm thrown into frame, a figure outlined by the door. Throughout the book, Mak’s life, her work, her journey, gradually moves into the center of the frame. The first ‘chapter’ of the book tells the story of her difficult beginnings as the eldest daughter of a poor farming family. Her mother died young, she took over the care of her siblings, was forbidden to go to school and was expected to work in the mulberry fields. Around 1920, she decided to comb up, warned by her grandfather that her brother may not care for her in old age. Moving to Hong Kong in the 1940s, she took work as a nanny, shifting between different employers.

Each job she worked at is represented by a dark, hard-to-make-out image made by Tong using a pinhole camera, the exposure time corresponding to the number of weeks the job lasted. These images are paired with Mak’s own voice, recounting her often difficult memories of past employers. Fishing through his family album, Tong’s family snapshots chart her entry into his life. First located at the edge of the frame, Mak slowly emerges as a part of the family album.

The second chapter pairs these pictures of Mak in Tong’s family with traces of her presence back home in rural Southern China. Here are the fruits of Tong’s search in her own family’s archive, where she is photographed at several weddings—a faded figure, yet easy to spot due to her distinct clothing. In his efforts to build this part of the album, Tong discovered Mak’s great influence on her family back home. Provider of the seeding money for her nephew’s now-successful business, Mak purchased houses and land for her family, paid for their education, and also supported them throughout the crop failure during the Great Leap Forward.

In his excavation, it is Mak’s unexpected legacy that leaves the biggest impression. Photographs of her nephew’s large factory pay testimony to the importance of her role as provider for the next generation of her family, while the less fortunate story of another nephew, who gambled his business away, is briefly visualized in a mini flip-book embedded in the book. Interspersed with still lifes of her own few possessions, a modest life is juxtaposed against the prosperity she has been partially responsible for elsewhere.

Seen against the backdrop of the Chinese magazine material peppered through the book that charts the shifting values, aspirations and messages of society, from the glamour of pre-Communist times to the economic boom of the ’80s, Mak’s story is drawn back into a wider history. When told in full, her story, in part representative of her wider community, is a rich and layered alternative to the mass media’s perception of women—one that evades its expectations and restrictions. Journeying from the first blurry image, a mere suggestion of a character, we arrive through the book’s constellation of images at the last photograph: a full-frontal selfie of Mak. 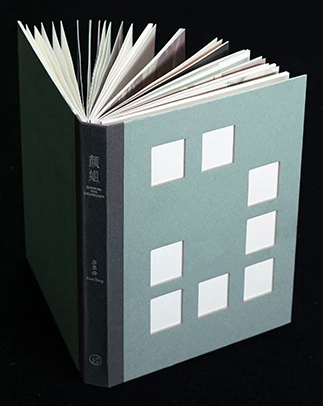 Combing for Ice and Jade