Feature
Arles 2016 in Review: Street Photography Revisited and More
Two exhibitions revisiting street photography stole the show at this year’s festival in Arles—read our thoughts on what made them special (and what made the rest of the festival a bit disappointing).

Critical review of the 47th Rencontres D’Arles
By Alexander Strecker

Arles 2016 in Review: Street Photography Revisited and More
Two exhibitions revisiting street photography stole the show at this year’s festival in Arles—read our thoughts on what made them special (and what made the rest of the festival a bit disappointing).

The festival in Arles, for its 47th edition and second under director Sam Stourdzé, continues to push at the boundaries and definitions of photography, offering the world a snapshot of where the medium has been and where it might be going.

As ever, the festival attempts to be all things for all people: iconic names like Don McCullin and Garry Winogrand receive top billing, with the still regal McCullin given center stage during the first week’s closing presentations. At the same time, the festival puts forward unexpected, even challenging cross-fertilizations of forms that probe the future of photography’s place in the world of contemporary art. 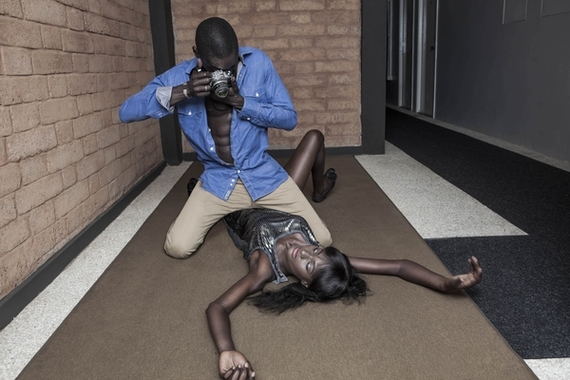 From the exhibition “Tear My Bra,” a look at Nigeria’s film industry. This photo: Blow Up, Dakar, 2013. Project (re-)Mixing Hollywood. © Antoine Tempé.

For example, within the 40 some exhibitions included in the program, visitors will find: bronze sculptural installations complete with running water; vintage abortion instruments; paraphernalia from Nollywood, Nigeria’s booming film industry; a room constructed solely from televisions running September 11th newsreels on repeat; not to mention an entire show dedicated to the question of “New Forms for Contemporary Image Production.”

Depending on your aesthetic sensibilities, some of these shows will be of greater or lesser interest, but to the festival’s credit, there really is something for everyone. For every photography-lover who champions the primacy of silver-gelatin prints (see McCullin’s beautifully presented work), there is another who pines for even deeper forays into the world of moving images and virtual reality. On the historical side, wonderfully understated, anonymous vintage photographs from the Sébastien Lifshitz collection deal with our ever-fluid definitions of gender; a quiet but affecting counterpoint to the festival’s brashest inclusion, Andres Serrano and his ham-fisted “America” portraits. 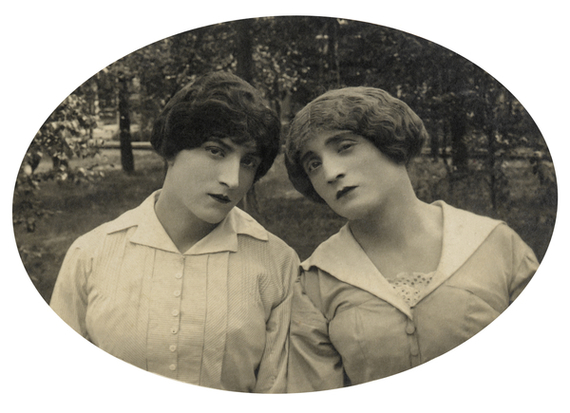 French war prisoners in the Königsbrück German camp circa 1915. Courtesy of the Collection Sébastien Lifschitz.

But what struck me most in visiting the festival was the degree to which many of the more ambitious and seemingly cutting-edge shows seemed uncertain in their footing and out of place in their presentation. The old SNCF Ateliers, in the throes of a major make-over but open for the festival, are the best case in point. These impressive, Berlin-style warehouse exhibitions appeal upon first entrance but almost* (see below) all fall flat upon closer examination. An enormous production budget and a world-class space come to naught when filled with disconnected, empty work.

Indeed, as Arles continues to grow and further stake its claim as the annual calendar’s premier photography showcase, it would do well to take note of shows like Eamonn Doyle’s small but potent exhibition, “End.” which leads the way in the generally excellent section of the program titled “Street Photography Revisited.”

The installation, which is composed of three distinct but interrelated projects, offers its viewers an intense, enveloping experience into Doyle’s vision of the streets of Dublin, his home. The exhibition’s combination of tack-sharp prints with an ingenious layout and haunting soundscape demonstrate the degree to which photography can be at the heart of a multimedia presentation that is made stronger by contributions from other fields.

First, the photographs. Doyle’s work is shown in three sizes: small, vibrant prints hung in grids or in unexpected juxtapositions, popping off the walls. Life-size images, in black and white, such that we are confronted face-to-face with the variety of humanity that we encounter on any city street. And finally giant-sized pictures, on vinyl, looming over us with both grandeur and anxious mystery. 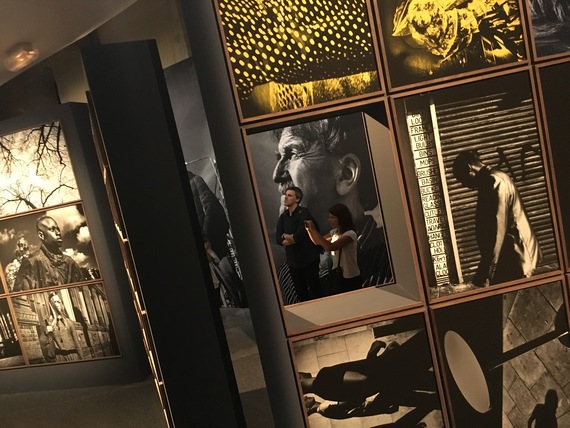 From the exhibition “End.” Photo courtesy the artist, Eamonn Doyle.

In terms of layout, the three rooms are economically packed in: each project’s images are thoughtfully hung creating both internal and external reverberations. The middle room particularly shines, as it contains print-sized holes within the dividing walls, open to the other side. These “empty frames,” with nothing more than their absence, provide us with possibilities of varied viewpoints and spectatorship. Finally, between the second and third room, we find a yellow window, a transparent divider almost stained-glass-like in its elegance. This partition is covered with one of the Doyle’s collaborator’s unsettling ink drawings whose labyrinthine pattern seems to offer the key to the whole exhibition.

Despite the cramped conditions (it was also the opening week), no single part of this tightly wound installation overwhelms the others. The photographs work together with the drawings, which are perfectly complemented by the eerie (yet never intrusive) soundtrack. For many in attendance, Doyle’s work stole the show. 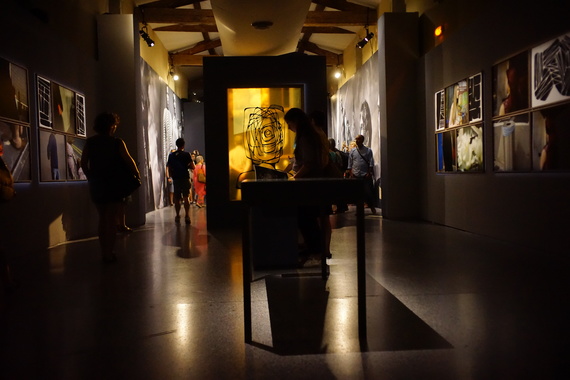 From the exhibition “End.” Photo courtesy the artist, Eamonn Doyle.

Two other exhibitions impress as well and provide much-needed bright spots to the hulking SNCF ateliers: an intriguing and smart comparison between the work of contemporary photographer Ethan Levitas and street master Garry Winogrand as well as Laia Abril’s chilling and powerful show on abortion.

In the former, we find a towering figure of photography invoked not only for his star power but as a means to better understand the work of a modern practitioner. The argument made by the exhibition is that street photography, so often dismissed as an amusing visual parlor game, is in fact an important player in the discourse of contemporary art. Winogrand’s ever-rich and ambiguous frames set the stage for Levitas’ thoughtful forays into 21st century New York. Using the familiar language of street photography—fundamentally, an exploration of our public spaces and the roles and relations established in these places—Levitas’ work seems to touch on timely subjects such as police brutality, state surveillance and a sense of well-being in our post-9/11 world. 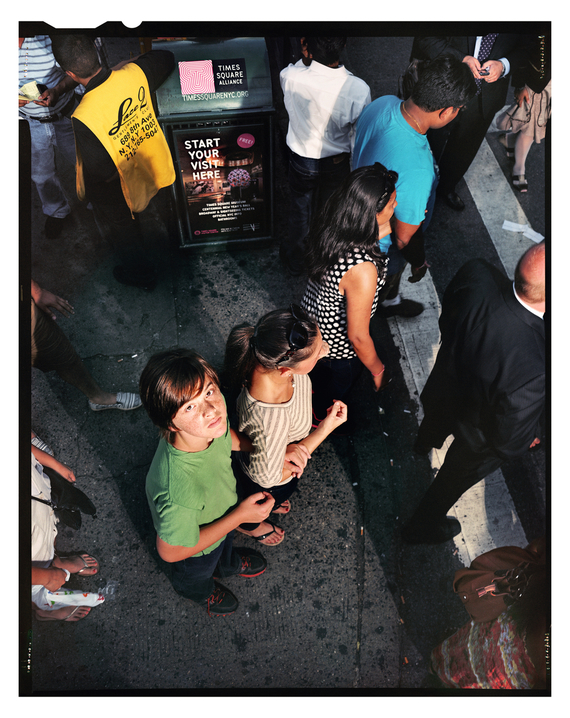 This is only on the surface however. By spending more time with Levitas’ photographs, much deeper engagements reveal themselves—complex questions of reality, perception, artistic intervention and the act of photographic representation. The outlines of a major re-interpretation of Winogrand’s work become dimly visible; festival director Sam Stourdzé’s desire to turn Arles into a ”laboratory” for artistic experimentation comes briefly into fruition…But, unfortunately, therein lies the show’s weak point: its own ambition. Considering Winogrand’s immense oeuvre, the complexity of Levitas’ investigations and the curator’s impressively large thesis, the exhibition (recall: one among over 40) can’t possibly explore everything that has been brought to the table.

But better too much substance than too little. Even if the show is not a complete success, at least it feels like the first chapter in a longer engagement. Unlike some of the grandiose exhibitions nearby—which try to inflate overworked ideas into big spaces yet only succeed in leaving a flimsy trace—the Winogrand/Levitas pairing packs a punch that leaves us wanting more. 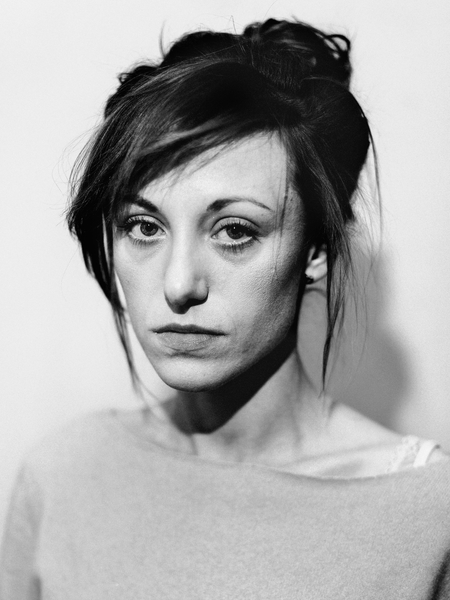 Finally, Laia Abril’s exhibition, “A History of Misogyny Chapter One: On Abortion,” which is, in fact, the first installment in a longer investigation. Abril’s work, besides being very emotionally affecting, showcases the depth and multiplicity of photographic documentary storytelling in 2016. Abril brings to bear several years of research and a mind-boggling array of materials—audio, visual, sculptural (a moving installation of clothes hangers, symbolizing the vast number of illegal abortions carried out today)—in her powerful examination of abortion in the modern world.

Like Doyle, Abril enlists other mediums to help her convey her point. And like Doyle, each addition is carefully considered, giving further depth and power to her important investigation. The exhibition doesn’t fill more than a couple of gallery-sized rooms, but the impression the work leaves behind is far, far larger.

Ethan Levitas once said in an interview, “Photography is subversive not when it shocks but when it thinks.” The opening week of this year’s edition was filled with both—for every engaging part of Levitas, Doyle or Abril, we had another shockingly empty part that was conceptual and “edgy” without meaning. As the festival continues to grow in preeminence and grandeur, we hope it maintains its sense of subversion—but always with a sense of purpose and force.