Interview
Learning How to See: Redwood Saw and Beyond
Recognizing your innate curiosity as an asset; seeing photographic series as novels; the life-long process of learning how to “see”—dive into a wide-ranging discussion with photographer and educator Richard Rothman.

Learning How to See: Redwood Saw and Beyond
Recognizing your innate curiosity as an asset; seeing photographic series as novels; the life-long process of learning how to “see”—dive into a wide-ranging discussion with photographer and educator Richard Rothman. 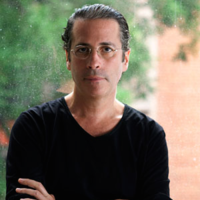 In 2004, Richard Rothman set out to document the redwood trees in Northern California with his large-format camera. The project quickly evolved into an investigation of a nearby town, Crescent City, a logging and fishing community teetering on the edge of economic disaster.

Here, Rothman discusses his beginnings with the medium, the joys of portrait-making, building narrative in photography and much more.

LC: I read in an old interview that you’ve loved picture-making all your life—your interest started when you were six and never faded. It made me happy to think you discovered your calling at such a young age! Have there been doubts along the way, though? What were some formative experiences—or daily reminders you gave yourself—that helped keep your creative fire unquenched?

RR: Well, there are always doubts about the risks that are entailed in trying to make a life for yourself as an artist. You have to devote an enormous amount of time, first to learning the craft, and then to taking on projects that may often be self-funded without any guarantee that there will be financial compensation or even critical success. But for me it’s always been a vocation or a calling, as opposed to an avocation.

The greatest encouragement has come from those breakthrough moments that many of us have, when you’ve taken a picture that is more satisfying than any you’ve managed to create up until then. And you might not even recognize why immediately, but it points the way to a new direction that you realize you are going to pursue, no matter the cost.

Walker Evans once said, “A really good picture is like hitting a bulls-eye. It’s enormously satisfying.”

I think it’s important for artists to trust their instincts and follow whatever it is they find interesting. It’s equally important for us to ask our own questions. One of the great things about making art is you get to bring your own unanswered questions to the table. That, in itself, is motivating because you’re dealing with your innate curiosity—a great asset—and combining it with elements of the unconscious.

LC: Before turning to landscape photography, you used to make portraits (including some very famous individuals, e.g. Miles Davis). With your more recent work, how do you relate to the idea that every photograph is a (self)-portrait? Some of your landscapes have people in them, others are wholly empty. But how do you approach each situation differently?

RR: I was, and still am, a great fan of Diane Arbus’ photography. When I was just starting out, the part of what made her work so emotionally high-pitched and bound together by connective tissue was that all her portraits were self-portraits in a way. In Arbus’s case, she was looking for subjects that mirrored the pain and identity issues that she struggled with in her own life. She found a way to bring that intensity to her photography.

I’ve spent a long time working on projects that can be described as ‘portraits’ of particular American towns—narrative projects that combine elements of landscape, portrait, architectural, and still life photographs. I’m always asking people I don’t know if I can take their picture. I can walk down the street and see a hundred different people and not want to photograph any of them, but then suddenly I’ll see someone and know immediately that I’d like to take their picture.

Portrait-making is a bit like collecting; I’ve come to think of it as ‘casting.’ I’ve learned to trust my intuition, because there’s always a reason that a particular person speaks to you. Something in them strikes a chord with a feeling you want to represent.

For me, landscapes are similar in that way; they represent aspects of the culture that I want to explore. In “Redwood Saw,” my interest certainly stemmed from an instinct to engage with issues of sustainability and the loss of magnificent ecosystems. Additionally, I wanted to register the impact of unsustainable economics on the ordinary people in a small town.

LC: I was fascinated to read about your desire to “get as near to the novel form in pictures” as you can get. In your years of working, have you ever gotten close to this goal? If you haven’t, do you think anyone else has? What about those who protest against photography becoming too narrative?

RR: That’s an elusive goal, and I can’t say I’ve pulled off, but it’s been an inspiring aspiration! I love the book form, and that’s the way I think about my long-term projects. My books have a beginning, a middle, and an end, and hopefully they have a rich variety of thematic content and subtext while maintaining a narrative thread like a story.

Meanwhile, there are lots of great photo books that don’t have a narrative structure and that aren’t meant to. A book of topographic photography is the antithesis of a narrative approach. It’s all in the way the images are sequenced: this arrangement determines if it’s a journey or a collection of single images or moments.

LC: In discussing “Redwood Saw,” you once said, “The business of trying to photograph a town is a poetic act, because a town—even a small town—is a big thing, and you have to select, edit, pare down, and represent your vision of your experience…” To me, this sounds like you’re describing all of photography: selecting/editing/paring down to represent a vision. Talking with photographers, I find one of the biggest troubles they have is editing their own work. What advice can you offer for the isolated artist who needs to get a fresh perspective on his/her own work?

RR: Yes, I find editing to be the hardest part of the process. In my case, I begin editing by looking at the pictures I’ve done and ruthlessly selecting the ones that are the strongest. I do this continually while I’m working on a project. As I begin to assemble my first edit, the pictures reveal the themes I want to explore more deeply. I also begin to see what’s missing, which guides my further exploration.

For others, it’s hard to generalize. But I can say a few things. First, I don’t think you have to have a preconceived structure before you begin a project. I think you simply have to be intensely curious about it, and it has to be something that’s important to you. Once you begin shooting, hopefully you develop a good idea of what it is you want the work to be about. Later, it’s important to know which of your pictures are the strongest ones. If you’re feeling stuck, having a fresh perspective from supportive and trusted sources can be extremely helpful.

In the end, though, you have to have the courage to trust your own judgement.

LC: You clearly think deeply about your work. But landscape photography, in particular, has a certain thoughtless, unintellectual beauty to it (reflecting nature’s own non-rationality). How do you balance seeking something out in the world vs. emptying your mind? Is this a struggle or a natural tension that you embrace?

RR: When I began shooting landscape photography, I was interested in the morose, often comic, role that nature plays in the built environment. I was photographing many of the things that drive me nuts about so many American places. It wasn’t until I had completed that cycle of work that I decided to photograph nature on its own terms, which is how I started “Redwood Saw.”

To begin, I asked myself what would it be like to take celebratory photographs of places that I loved. It seemed like a real challenge to photograph nature on its own terms without being corny or derivative. So my interest in forests and the role they play in a healthy ecosystem led me to the Redwood, which is one of the most beautiful environments I’ve ever been in. After photographing in the forest, I realized that a more compelling project would also include the adjacent town of Crescent City, which had at one point been covered by that same forest. That’s where the story began to come in…

LC: You’ve said, “It’s very important to learn how to ‘see.’” Yet you were self-taught, nourishing yourself on a diet of books and exhibitions. How do you view the choice between formal education and auto-didaction? It’s clearly a personal one for all of us, but what would you ask or tell someone who is hesitating between the two?

RR: I think there are different meanings we bring to the word “seeing.” As photographers, we often mean learning how to see photographically, which is different from the way our eyes and brains are connected.

How often do we take a picture of something or some moment only to “see” that the feeling we had about the subject didn’t translate to the image?

It happens more times than it doesn’t, so learning about the limitations and strengths of photographic seeing is very important.

Learning from the experience of people who have thought about and understand these issues can be a wonderful advantage. That’s what we try to impart as teachers. I would have saved a lot of time if I hadn’t had to figure all this out on my own! I also would have been interested in the possibility of connecting with photographers whose work I admire, no matter where they lived. That is what online classes can offer.

Finally, I’d say that there’s a difference between seeing and perceiving, which can be profoundly important as well. A great photograph can guide the photographer and the viewer through the act of seeing to perception and, hopefully, understanding.

If you enjoyed this article, you might also like one of these previous features: Mayah, a meditative series on the fallibility of perception; Weekend Warriors, about the struggle between engaging with a situation versus photographing it—told through the lens of the Amsterdam after-party scene; and Yoz: A Natural History, dramatic black-and-white photographs of the natural world.