Feature
Jenny’s Soul
Dirk and Jenny have lived together happily for four years—so what if Jenny is a silicone doll? Before judging, take a look at these beautiful photographs (+ video) and ask yourself, “What is normal, anyways?”
Photographs and video by Sandra Hoyn
View Images

Jenny’s Soul
Dirk and Jenny have lived together happily for four years—so what if Jenny is a silicone doll? Before judging, take a look at these beautiful photographs (+ video) and ask yourself, &#8220;What is normal, anyways?&#8221;

Access was the hardest part: first, I was afraid Dirk would say he didn’t want his photograph taken. Then, I was even afraid of Jenny—that she would say to Dirk that she didn’t want her picture taken either.

This series is about a man, Dirk, who lives with his silicone doll, Jenny. Dirk and Jenny have been living together (happily) for four years.

Dirk first decided to buy Jenny because he was suffering from a breakdown and feeling extremely lonely. Dirk had been in serious relationships on two other occasions, so what he was really looking for was companionship. As I quickly saw, the doll had become a true partner, not just a sex toy.

Indeed, Dirk has developed a complex emotional relationship with Jenny. He is able to hear her, talk to her, and perceive her soul. The doll gives him an important sense of security; Dirk says he cannot live without her. He’s really happy now. I can’t fully understand it, but he is happy.

At first, I was concerned about exposing him. Their entire shared daily life takes place only inside their apartment because Dirk does not know how strangers would react to their relationship. Still, he was not as closed off as I feared. Dirk has friends, some of whom even know about the relationship. He only makes sure to keep Jenny a secret from his child, who he doesn’t think is ready to know just yet.

So, Dirk allowed me into his space, but still, I was nervous. Although he and I got along very well almost immediately, I felt afraid to go to his home and meet Jenny. If Jenny told him, “I don’t like her,” it would be over.

My other fear was that it’s so easy to take bizarre photos. It was difficult to put both subjects on an equal level. But if I were really going to empathize, it was important to see Jenny as more than just a doll—I had to see what Dirk sees and loves.

Quickly, however, I entered into his world. One time, Dirk put Jenny in bed for an afternoon nap and I found myself beginning to talk very quietly, so as not to wake her. Afterwards, I thought “What am I doing?!”—but just like that, I was seeing the world through Dirk’s eyes.

I’ve become quite attached to Dirk. Sometimes I find myself defending him. People just don’t understand. What is so bad about what he’s doing Why not? He’s not hurting anyone.

Below, you can see the slideshow that Hoyn shared with the audience at the World Press Photo Award Days in Amsterdam. Amazing work!

Or you can see the work of all of this year’s winners in our World Press Photo Awards 2015 overview.

Dirk holding Jenny's face in his hands. “Jenny is a soul from another world. She is an energy of a world without brains and senses that we have.” © Sandra Hoyn
“With my ex-wives I always had to fight for love. Not with Jenny. With her I found peace.” © Sandra Hoyn
Dirk carrying Jenny into the bathroom. He always has to remove the door so that Jenny fits through. “Jenny is such a sensitive being. She is so helpless.” © Sandra Hoyn
“It is difficult to clean Jenny from the inside after we have had sex, so I had rather come outside. In the beginning we had sex a lot of times, as it is usual in any relationship, when you are newly in love. Now this is no longer so important for us.” © Sandra Hoyn
“Jenny comforts me. She is the best therapist for me. She has completely changed my life, my thinking, my definition of freedom, of love and partnership.” © Sandra Hoyn
Jenny sitting on the sofa in the living room while Dirk hangs up her laundry. © Sandra Hoyn
Dirk and Jenny have a fixed daily schedule. Every evening at 6 pm they are sitting on the sofa watching television. © Sandra Hoyn
Jenny's body is not perfect anymore. Her skin peels off. © Sandra Hoyn
“Jenny likes to wear beautiful clothes. But she does not care for brands.” Every Sunday Dirk washes her lace lingerie and wigs. © Sandra Hoyn
“I can´t live without love. My loneliness destroyed me.” © Sandra Hoyn
Dirk and Jenny sitting in front of the computer. Both regularly write in a blog about their life together. © Sandra Hoyn
“At the moment I don`t need any other women. Otherwise she would have to share my love with Jenny.” © Sandra Hoyn
They got married after a year. Jenny wears a necklace with a heart, Dirk`s wedding gift. A ring would not fit over her silicone finger. © Sandra Hoyn
Dirk powders and massages Jenny's feet. He cares for her silicone skin every Sunday after bathing to keep it soft. © Sandra Hoyn
“I often need a rest. Dirk also.” © Sandra Hoyn
“Jenny gives me security. I never want to live without her again. I am moved from her words. The purity, serenity and honesty of her speaking.” © Sandra Hoyn
Jenny sitting in a wheelchair in front of the window. She weighs about 50 kg so Dirk uses a wheelchair to walk with her through the apartment. The rooms are all darkened so the neighbours cannot see inside and discover the doll. “It is a pity that I can never leave the house together with Jenny. Sometimes I would like to go with her to the cinema.” © Sandra Hoyn
Dirk resting with his silicone doll Jenny in bed. Both need to rest often, they have a nap every day. © Sandra Hoyn 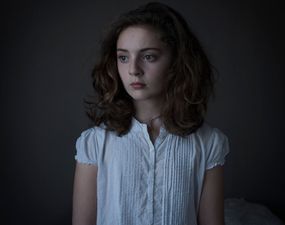 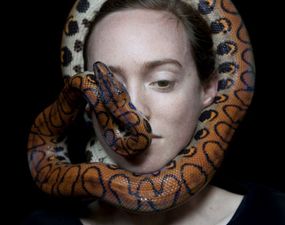 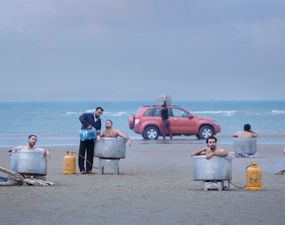 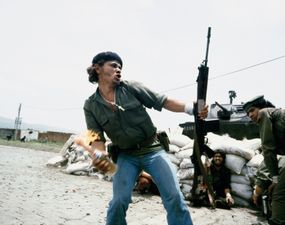 On the Frontline and to the Limits of the Frame
Susan Meiselas
A new book of Susan Meiselas’ work offers readers a glimpse into the mind of this renowned photographer—and picks apart her lifelong drive to push her work “beyond the frame.” 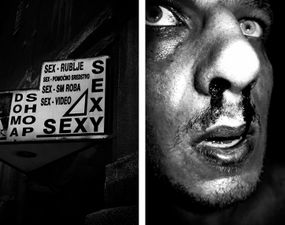 Shadow Of Desire
Sebastian Palmer
A conceptual meditation on the dark side of human psychology — using diptychs of tough black-and-white images.

Alien Territory
Med Photo
“The very structure of being itself involves a journey”—a challenging group exhibition that looks at the issue of migration from the perspective of those on the inside, an uncharted area where we become strangers even to ourselves.